Sunday, October 17, 2021
Rajpostexam.com Single Spot For Worldwide Information And News
Home Trending News 10/10 If You Can Guess The Actress In This Pic
FacebookTwitter

The actress let her hair do the talking this time 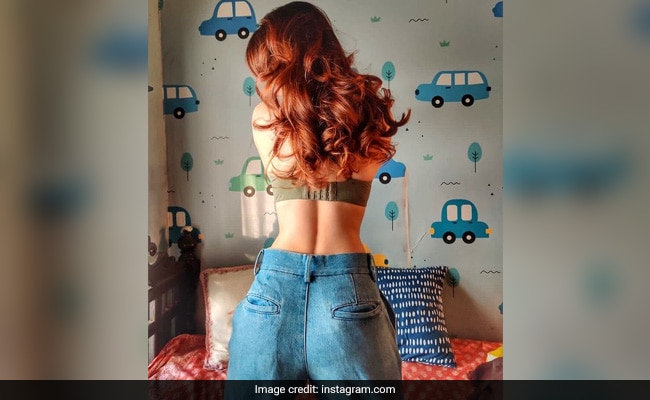 No words needed to caption this photo (courtesy iamsanjeeda)

A good hair day is like a blessing. And, here we have Sanjeeda Shaikh to second this thought. She stepped into the first day of the week in style. Sanjeeda let the world take a look at her glorious golden brown tresses basking in natural light. She is wearing an olive green bralette with denim pants in the latest post. The actress let her hair do the talking this time. The picture was an instant hit on social media with people calling her “pretty” and “cutie”.

Sanjeeda is quite active on Instagram where she has over 4.1 million followers. In a previous post, the actress can be seen in a purple dress with red lip colour. The post has amassed over 97.4k likes since it was shared on Saturday.

In February, Sanjeeda featured in the music video Saiyaan by Punjabi singer Jass Manak. In the clip, Sanjeeda is channeling her glamorous side as she grooved to the peppy beats.

Sanjeeda and Harshvardhan will once again wow the audience in the horror thriller Kun Faya Kun. In an Instagram post, Sanjeeda shared a picture from the sets of the movie announcing its wrap-up. “A breathtaking thriller, a fun-filled shoot, finally comes to a wrap! My next movie is Kun Faya Kun. Directed by Kushan Nandy is coming to cinemas soon. Stay tuned,” the caption read.

The pic features Sanjeeda along with film’s director Kushan Nandy and Harshvardhan.