“Based on its girth and size, it is assumed to be a female and that she has been roaming our waters over 100 years,” wrote the Alpena Fish and Wildlife Conservation Office. 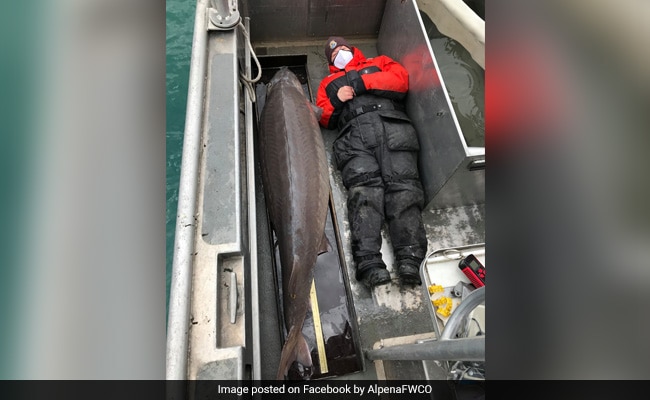 A fish believed to be a century-old was caught in Michigan.


The United States Fish and Wildlife Service last week caught a 100-year-old sturgeon, a unique fish species, in the Detroit River. The creature weighed just over 90 kg and measured 6 feet and 10 inches. The girth of the fish was nearly four feet, the Alpena Fish and Wildlife Conservation Office said in a post on Facebook. They added the “real life river monster” was one of the largest lake sturgeon ever recorded in the US and that she could be roaming in these waters for over 100 years.

“Based on its girth and size, it is assumed to be a female and that she has been roaming our waters over 100 years. So, she likely hatched in the Detroit River around 1920 when Detroit became the 4th largest city in America,” the post read. The office also shared a photograph in which a staff member was seen lying next to the monster creature on the deck. The sturgeon was quickly released back into the river after being processed, the office added.

The post has already been shared by more than 47,000 people on the social media platform and thousands of others have commented on it. Some even expressed shock that a creature that old could survive in the waters despite all the pollution.

“It’s amazing that fish has survived all the pollution over the years. Absolutely awesome to see this fish,” wrote a user, Jason Kahler.

Sheila Lyons-Sobaski, another Facebook user, commented: “Good to know that the Detroit River can support this species for so long.”

“Wow! Pretty awesome! There are bigger but this is still a beauty! Aren’t they amazing creatures!” wrote Linda Ondovcsik.

Another user, Star Angel Sapphire, appreciated the authorities for releasing the fish back into the river, saying she was glad they let it go.

“I think things that big that live to be that old should be allowed to live the rest of their lives in peace. That’s amazing though!” she added.

In Michigan, the Department of Natural Resources has listed Lake sturgeon as a threatened species. Commercial fishing of lake sturgeon is currently prohibited in the state and sport fishing is closely regulated, the department mentions on its website.

It further says that Lake sturgeon could grow up to seven feet in length and weigh up to 200 lbs. The females are longer and heavier than males and the fish’s lifespan is estimated to be 55 years for males and 70 to 100 years for females.

Villarreal vs Man United: When And Where To Watch Live Telecast...