99 Songs Review: There can be no denying though that the film has an interesting supporting cast – seasoned actresses Manisha Koirala and Lisa Ray on one hand and accomplished musicians Ranjit Barot and Rahul Ram on the other. 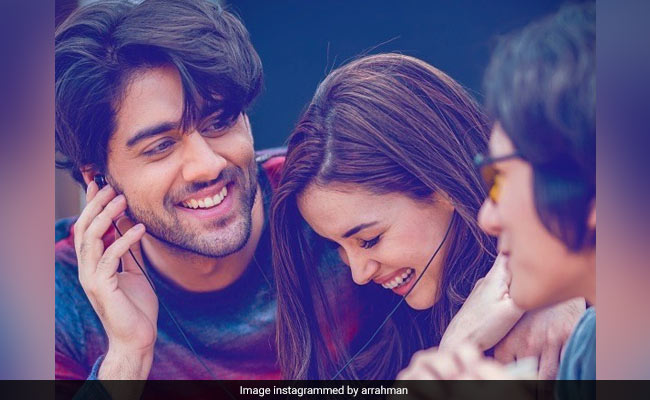 99 Songs Review: A promotional poster of the film. (courtesy ARR )

Painterly frames, an artfully fragmented narrative structure, deliberate pacing, restrained acting and a lush musical score combine to give 99 Songs, based on a story written by A.R. Rahman, a distinctively elegant quality. Unfortunately, none of it seeps beneath the surface. Music cannot be seen, it can only to be felt, a character intones in the course of the film. The opposite is true of 99 Songs: what you see on the screen is oftentimes eye-popping but you barely feel the warmth, or depth, of the images that flow by without casting a lasting spell.

An over-reliance on fractured flashbacks and fevered recollections from multiple standpoints prevents the screenplay by director Vishwesh Krishnamoorthy from attaining either clarity or unhindered flow. 99 Songs, littered with befuddling interludes, isn’t all music. With style overshadowing substance, the film works only in parts.

The two newcomers in the cast – Ehan Bhat and Edilsy Vargas – appear to be up to the task of carrying the film on their shoulders but the characters they are saddled with lack genuine meat. The premise is flimsy: a young pianist thwarted in love finds himself up against the challenge of making a whole load of music as a means to impressing the father of the mute girl he wants to marry.

Needless to say, there are obstacles in the man’s way and he is pushed to the edge of despair. Somebody tells the protagonist, “Badi interesting kahaani hai tumhari.” Nothing could be further from the truth – his really is a rather bland story sought to be livened up with the visual flourishes that cinematographers Tanay Satam and James Cowley add to the film.

There can be no denying though that 99 Songs has an interesting supporting cast – seasoned actresses Manisha Koirala and Lisa Ray on one hand and accomplished musicians Ranjit Barot and Rahul Ram on the other. Also in the mix are Ashwath Bhatt and Warina Hussain but none of them is given the leeway that could allow them to rise above a constricting script.

Given the manner in which the key characters are etched out, the audience is left to grapple with too many unanswered questions. Rahman’s songs are salve for broken hearts, but they cannot paper over the whimsical leaps that the story makes as it wends its way towards a climax that errs on the side of the fanciful. 99 Songs culminates in a final act that is designed to demonstrate the (literally) earth-shattering power of music, which pulls into its ambit a corrupt, apparently hidebound politician of all people.

Ehan Bhat plays Jay, a young man whose father has ordered him to stay off music because it has destroyed the family; Edilsy Vargas is cast as Sophie Singhania, a wealthy entrepreneur’s speech-impaired daughter who paints, designs and dances as a mean of unbridled self-expression. The two are madly in love. The girl’s dad (Ranjit Barot) is in awe of the boy’s talent all right. But he is dead against Sophie marrying “a struggling musician”.

Go and compose a hundred songs and then come back and ask for my daughter’s hand, says the cynical old man. A crestfallen Jay flinches for just a fleeting moment before dutifully deciding to prove his worth. He sets out to create 100 songs in search of that one ditty that will change the world.

Egged on by his best friend Polo (Tenzin Dalha), he relocates to Shillong – the best place in the world gaane likhne ke liye, the pal says – to have a go at rustling up the numbers. The size of Polo’s joint family takes Jay, a loner, by surprise. They are a noisy bunch. Jay is more comfortable wrapped up in his own world. But it isn’t a collision that ensues but a smooth process of settling in and moving on with life.

99 Songs is predicated on simple ideas that are placed in opposition to each other. The main point of conflict obviously centres on music. While the hero’s father believes that music is the world’s most harmful addiction, the young man’s musical genes inherited from a mother who died the day he was born push him towards creating songs and making a bid for the love he has lost.

The simplicity at the heart of 99 Songs is bewitching in its own way. If only the exposition of the male protagonist’s inner impulses and the dimensions of his struggles been invested with more layers, the film would have added up to more than just a string of pretty images and an amalgamation of hypnotic musical compositions.

In Shillong, Jay meets the hard-drinking Sheela (Lisa Ray), a jazz singer who sweeps the hero of his feet. The feisty crooner who sings of putting a bullet through a man’s heart if he dares not to love her is contrasted with the soft and undemanding Sophie, who pines away in silence and channels her overwhelming grief into works of art.

The story takes a turn and Jay ends up in rehab where a sympathetic lady (Manisha Koirala), another of the many voices that the film employs to piece together the story in fits and starts, takes it upon herself to give the boy’s life a new direction. But like the other secondary figures in the film, this character merely looms inchoately in the background without ever developing into a rounded, tangible character.

99 Songs is far too focused on surface gloss – there is no dearth of it in its frequently dreamlike canvas – to notice that the wafer-thin story at its core is a muddling, meandering mess that is never in with a realistic chance of sorting itself out and shaking off its stupor.

The performances are adequate. Ehan Bhat has an unmistakable screen presence. Latina actress Edilsy Vargas does not have any lines to deliver but enough scope, aided by camera angles and musical accompaniment, to convey the agony of loss. Tenzin Dalha gives the role of the hero’s friend his best shot and makes a strong impression. The other actors in the cast are a blur pretty much like the film itself.

In terms of its music, sound design and pitching, 99 Songs strikes all the right notes. But its slight storyline is anything but mesmerizing.

99 Songs is a visual and musical treat infused with a sense of poise and repose. But its surface gloss cannot conceal the fact that it delivers far less than it promises.

“Black Fungus A New Challenge, We Must Be Prepared,” Says PM