Suniel Shetty recently made an appearance as a guest on Super Dancer Chapter 4, which Shilpa Shetty co-judges with Geeta Kapur and Anurag Basu 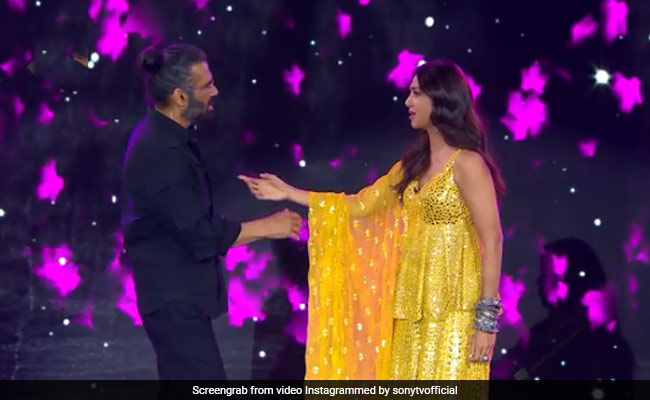 If you loved the Shilpa Shetty and Suniel Shetty’s pair in the 2000 film Dhadkan, this story will make your day. How, you ask? Well, we chanced upon a video of the actors recreating their iconic song Dil Ne Yeh Kaha Hain Dil Se from their film on the sets of dance reality show Super Dancer Chapter 4. Recently, Suniel Shetty made an appearance as a guest on Super Dancer Chapter 4, which Shilpa Shetty co-judges with Geeta Kapur and Anurag Basu. Now, a clip from the sets of the show has been doing rounds on the Internet. Reason? It features Shilpa and Suniel Shetty recreating their amazing chemistry to Dil Ne Yeh Kaha Hain Dil Se.

In the clip, Shilpa Shetty looks pretty in a traditional yellow outfit while Suneil Shetty looks dashing in a black shirt and jeans.

Dhadkan, directed by Dharmesh Darshan, released on August 11 in 2000 and also starred Akshay Kumar in the lead role. It showcased the love triangle between Akshay, Shilpa and Suniel Shetty

In terms of work, Shilpa Shetty is making her comeback to films after a gap of 13 years with Sabbir Khan’s Nikamma. She will also be seen in Hungama 2, co-starring Paresh Rawal, Meezaan Jaffrey and Pranitha Subhash.