Jaya Bachchan will begin with a campaign for three-time Tollygunge MLA Aroop Biswas, who faces Union Minister Babul Supriyo in defence of his seat 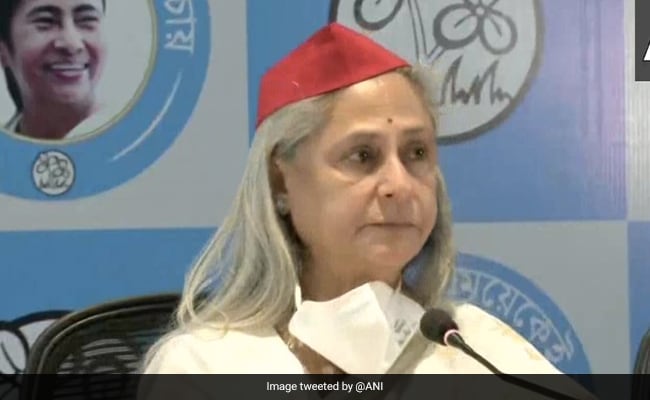 Samajwadi Party MP Jaya Bachchan, in Bengal to campaign on behalf of Mamata Banerjee and the Trinamool Congress, came out guns blazing at her first press conference, reminding voters that Ms Banerjee was “fighting to preserve the democratic right of every Bengali” and warning rival political parties – she did not name any – against “hijacking my religion… democratic rights”.

“Mamataji is fighting to preserve the democratic right of every Bengali,” she said.

Ms Bachchan also issued a veiled warning to the BJP over its campaign strategy – widely seen as a vicious and deeply polarising attack that referred to Ms Banerjee as “anti-Hindu” and someone who appeases Pakistanis and Muslims, and changed her traditional honorific of ‘didi‘ to ‘begum‘

Listed as a ‘star campaigner’, Ms Bachchan’s presence comes after a promise from party boss Akhilesh Yadav to Mamata Banerjee – that his party would campaign for her in this election.

Her presence also underlines Ms Banerjee’s plan to take on a ruthless BJP poll machine – to stitch together a pan-India working alliance of non-BJP parties, for this and other elections.

Jaya Bachchan will begin with a campaign for three-time Tollygunge MLA Aroop Biswas, who faces Union Minister Babul Supriyo in defence of his seat.

The rival and seat are both significant – Mr Supriyo is a popular singer and Tollygunge is Kolkata’s ‘cinema district’ – better known as Tollywood – that houses studios where films are shot.

Mr Supriyo was also in action today, claiming that Ms Bachchan and he were well acquainted, and that while she might target his party she would not speak ill of him.

“I welcome her to Bengal. Though I do not have family relations with her, she knows me very well. She will speak against BJP but will never say anything against me,” he told news agency ANI.

Ms Bachchan is expected to camp in Bengal till April 8, with a joint rally with Mamata Banerjee on the cards. That has not been confirmed yet, though.

On Wednesday the Chief Minister underlined the need to pull together in a letter to 10 opposition leaders, including Sonia Gandhi, whose Congress is firmly in the rival camp in Bengal.

The letter – sent on the eve of polling in Nandigram, where she faced protege-turned-rival Suvendu Adhikari – called for a “united and effective struggle against the BJP’s attacks on democracy and the constitution” and the “presenting a credible alternative to the people of India”.

Bengal’s eight-phase poll is a quarter done; the third phase will be held on Tuesday. The campaign, so far, has been exceptionally vitriolic, with corruption claims and personal attacks freely traded. After Tuesday, Bengal has four more voting days – April 10, 17, 22, 26 and 29 – before D-Day on May 2.