Serum Institute of India’s Covishield – developed in partnership with the Oxford University and British-Swedish pharma giant AstraZeneca – is one of the three vaccines India has cleared for emergency use. 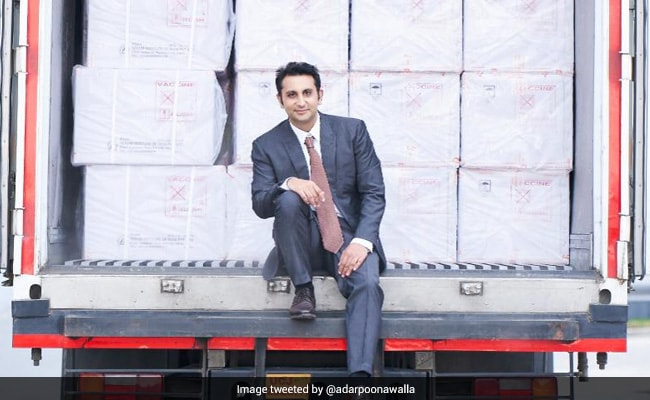 Adar Poonawalla admitted he is under tremendous pressure.


Adar Poonawalla, the CEO of world’s biggest vaccine maker Serum Institute of India, tweeted last night about the “excellent meeting” with “our partners in the UK” as he faces a huge challenge to meet India’s vaccine demands. He said he would be returning to the country in a few days.

Serum Institute of India’s Covishield – developed in partnership with the Oxford University and British-Swedish pharma giant AstraZeneca – is one of the three vaccines India has cleared for emergency use apart from Bharat Biotech’s Covaxin and Russia’s Sputnik V. 1.5 lakh doses of Sputnik V, which got clearance last month, reached India just last night. The country is breaching previous world records with an alarming daily rise in Covid cases; over 4.01 lakh cases were reported yesterday.

“Had an excellent meeting with all our partners & stakeholders in the U.K. Meanwhile, pleased to state that COVISHIELD’s production is in full swing in Pune. I look forward to reviewing operations upon my return in a few days (sic),” Mr Poonawalla said in a late-night tweet.

Had an excellent meeting with all our partners & stakeholders in the U.K. Meanwhile, pleased to state that COVISHIELD’s production is in full swing in Pune. I look forward to reviewing operations upon my return in a few days.

In an interview to ‘The Times’, a British daily, Mr Poonawalla said his SII is planning to start vaccine production in other countries. “There’s going to be an announcement in the next few days,” he was quoted as saying in the interview published on Saturday.

He also spoke about the tremendous pressure he is facing to increase the production amid fight against Covid as India continues to hit new global records. Last week, the Union Home Ministry said he would be provided “Y category” security, which involves the presence of 11 security personnel – one or two of them commandos and the rest policemen.

“I’m staying here (London) for an extended time because I don’t want to go back to that situation. Everything falls on my shoulders but I can’t do it alone…I don’t want to be in a situation where you are just trying to do your job, and just because you can’t supply the needs of X, Y or Z you really don’t want to guess what they are going to do,” Mr Poonawalla had told the newspaper.

He told the British daily that he is receiving calls “from some of the most powerful men in India”. “They come from the chief ministers of Indian states, heads of business conglomerates and others demanding instant supplies of Covishield,” the report read.

“The level of expectation and aggression is really unprecedented. It’s overwhelming. Everyone feels they should get the vaccine. They can’t understand why anyone else should get it before them,” Mr Poonawalla told ‘The Times’.

He had made similar remarks while speaking to NDTV last month. “The globe needs this vaccine… we are prioritising the needs of India (but) we are still short of being able to supply to every Indian,” he had said at the time.

India launched the third stage of vaccine production for those in the 18-44 age group even as several states said they’re falling short of stocks.

Holi 2021: What Celebrations Looked Like For COVID-Positive Milind Soman This...