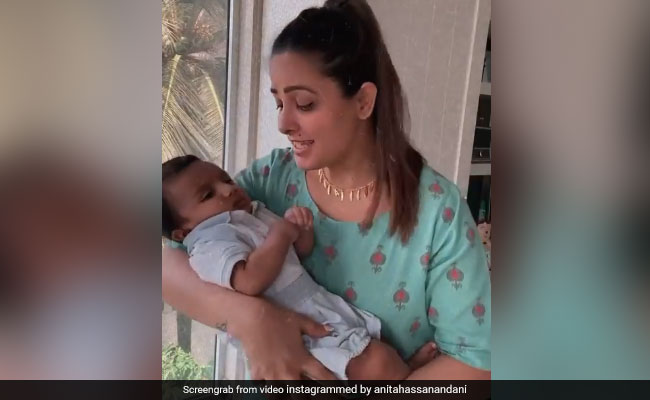 New-mommy Anita Hassanandani just cannot get enough of her baby boy, Aaravv. The actress often shares photos or videos of the adorable moments she spends with her new-born, on social media. When she’s not sharing something on her own Instagram handle, Anita’s husband Rohit Reddy uploads some entertaining baby content on his social media account. In her latest Instagram Reels, Anita hilariously mocks her own singing abilities. The first part of the video shows her lip-syncing a melodious lullaby while cradling Aaravv in her arms. In the second part, the melodious voice turns unpleasant.

With the first voice, a text on the video says, “How I think I sound.” In the next part, when the voice turns unpleasant, another text on the video reads, “How I actually sound.” Anita captioned the post as, “I think I’m gonna take up singing. Becharraaa Aaravv Reddy.”

The video has so far garnered over 2 lakh likes. Actress Neena Kulkarni was left in splits as she commented, “Mad Hatter.” Actor Nakuul Mehta, too, dropped a laughing emoji. Wrestler Babita Phogat found the clip “so cute”.

The Yeh Hai Mohabbatein actress had earlier credited herself for the stylish outings of her baby. A goofy video features Aaravv looking handsome wearing a onesie. A line appears that says, “Behind every well-dressed baby is…” In the caption, Anita wrote the answer as “mommy.” She is seen making a cameo in this Reel too.

Anita is a hands-on mother but that does not let her steer away from the responsibilities of being a good friend. The 40-year-old uploaded a fun Instagram Reels with bestie, actress Surbhi Jyoti. The TV actresses busted some common myths through the video including “actresses can’t be friends” and “actresses always wear makeup.” The caption read, “Friendship Goals I say. Love you.” Previously, Rohit and Anita enacted a funny video predicting how they would deal with a 20-year-old Aaravv partying in a pub.

Anita Hassanandani and Rohit Reddy got married in 2013. They welcomed Aaravv on February 9, 2021.