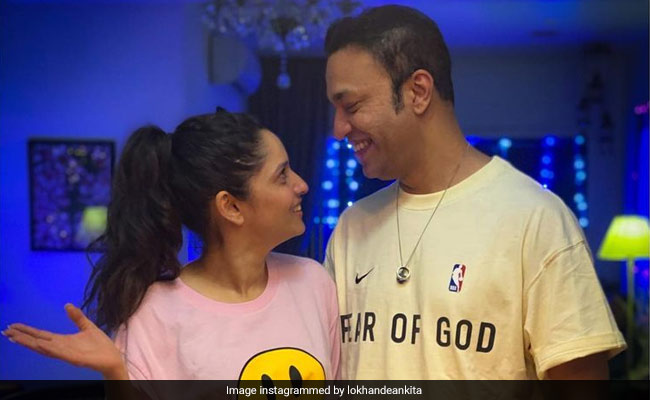 “Worlds change when eyes meet” and who knows it better than Ankita Lokhande, who is head over heels in love with her boyfriend Vicky Jain. On Sunday, Ankita Lokhande posted a couple of loved-up pictures of herself and Vicky Jain. In the photos, the actress looks adorable in a peach tee and jeans while Vicky Jain can be seen wearing a cream t-shirt and denims. They can be seen celebrating some occasion with a cake. Sharing one photo, Ankita Lokhande wrote: “‘The tides move in harmony with you’,” while the caption on her another picture read: “Worlds change when eyes meet.”

Check out these super cute pictures of Ankita Lokhande and Vicky Jain:

Ankita Lokhande and Vicky Jain have been together for more than 3 years now. Recently, celebrating “three years of togetherness,” Ankita posted this clip with her boyfriend.

And here’s how the couple celebrated Holi together this year. ICYDK, their mantra was – “dance, laughter, eat and then sleep.”

In terms of work, Ankita Lokhande is best-known for her performance in Pavitra Rishta that also starred her ex-boyfriend and late actor Sushant Singh Rajput. Ankita Lokhande has also worked in TV shows such as Ek Thhi Naayka and Shakti – Astitva Ke Ehsaas Ki.

The actress made her Bollywood debut with Kangana Ranaut’s 2019 period-drama Manikarnika: The Queen of Jhansi. Her last Hindi film was Baaghi 3, which starred tiger Shroff in the titular role.