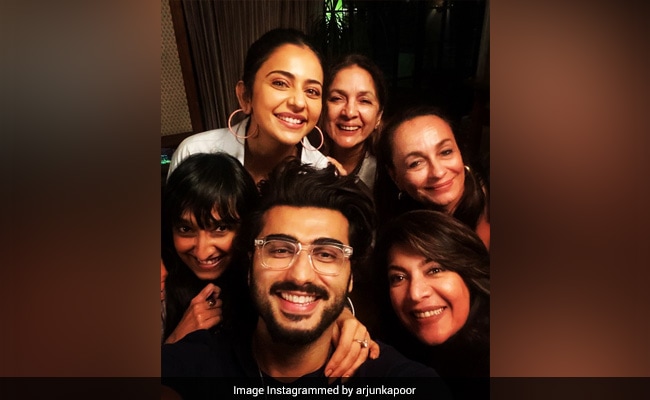 Arjun Kapoor has “always been a ladies’ man.” No, this is not a gossip, the actor himself shared this in his latest entry on Instagram. Arjun Kapoor, on Wednesday evening, posted a picture of himself with his Sardar Ka Grandson co-stars Rakul Preet Singh, Soni Razdan, Neena Gupta, Divya Seth Shah and director Kaashvie Nair. In the caption, the actor gave a big shout-out to his co-stars and wrote: “Always been a ladies’ man! So happy and proud of what I got to see last night…To all the ladies of #sardarkagrandson in front of the camera, also behind it and especially the 2 producers at Emmay Entertainment missing from this picture who worked tirelessly to make this dream a reality.”

The film is a cross-border love story and was filmed during the pandemic. It will mark the directorial debut of Kaashvie Nair. She is the daughter of Shashilal K Nair, who has directed hits such as Angaar and One 2 Ka 4. She has previously worked as an assistant director in Nikkhil Advani’s Patiala House and D-Day.

Sardar Ka Grandson has been co-produced by John Abraham, who will feature in a cameo role in the film along with Aditi Rao Hydari.

The film is set in 1947 and John Abraham and Aditi Rao Hydari play the roles of Arjun Kapoor’s grandparents in it. Earlier, talking about shooting the film during the pandemic, John Abraham said in a statement, “The team has taken extreme care, following all the SOPs, issued by the ministries and the concerned authorities. As a producer, it’s important for me to look out for our cast and crew.”

Arjun Kapoor announced that the film will premiere on Netflix with this post earlier this month:

In terms of work, Arjun Kapoor will also be seen in Bhoot Police and Ek Villain Returns.