In the past 96 hours alone, more than 11,000 people have lost their lives to COVID-19 across the country; in Delhi, the national capital, nearly 1,500 people died in that time 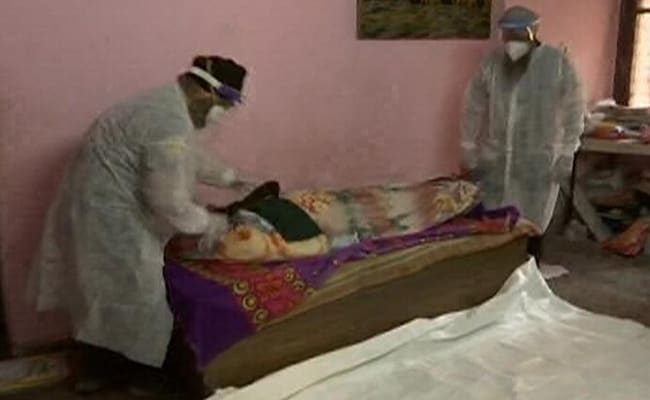 Delhi has reported over 15,000 COVID-19 linked deaths during the pandemic

Mr Yadav died at his home in the city’s Ranibagh area, his family consisted of a wife, who is also infected, and a young daughter, who told NDTV she’d tried desperately, and failed, to have her father admitted to a hospital for treatment.

For people like Neelam – who are unable to arrange a funeral either because they are scared, exhausted or cannot leave home because they too are Covid-positive – help arrives in the form of two young men, young Sikhs, who collect the bodies and make all the arrangements.

The images from Mr Yadav’s home leave you in tears – two men in PPEs lowering Mr Yadav’s body, wrapped in cloth and lying on the couch of a modest living-room, on to a plastic sheet on the floor.

There is no one else. Neelam is standing helpless outside the apartment building.

As Devender, one of the men arranging Mr Yadav’s funeral, and his partner, Pritam, struggle with body, they call out for help – to move it down flights of narrow stairs and into a waiting vehicle.

There is no help forthcoming because everyone is scared.

“How will two people take a body down two floors? This virus has killed our humanity… nobody is ready to help. We are here, no? Do we not have family at home?” Devender asks.

Eventually the two manage to carry the body down and into a waiting ambulance.

Devender and Pritam, who work with a relief organisation called United Sikh, have done this more than 300 times – 322 times, to be precise.

They follow Covid protocol and do not charge so much as Re 1 for all their help.

“We cremate people who are not in government statistics… who died at home and whose families need our help. Maybe they don’t even have family,” Pritam explains.

Devender is a photographer by trade. Pritam a businessman. They ensure a dignified funeral for those who may otherwise not be afforded one – whether Hindu, Muslim or otherwise.

And they aren’t the only ones to step forward as the novel coronavirus destroys lives and souls. Dozens of young men and women across the country have stepped up in this time of crisis.

Nearly two lakh people have died in India since the first case was reported in January last year. The first recorded death was in Karnataka’s Kalaburagi – a 76-year-old man.

Mr Yadav, like tens of thousands, of others, may be forgotten to the rest of the country but, thanks to Devender and Pritam, his daughter can rest easy knowing that at least he had a proper funeral.