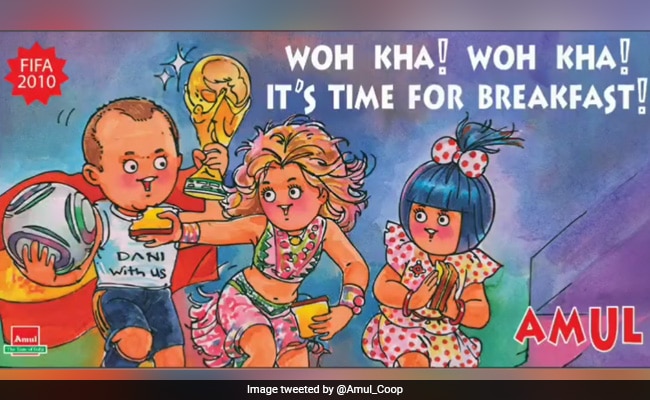 Dairy brand Amul has always grabbed the limelight with its unique marketing strategies. Now, as Football World Cup is here, the brand walked down memory lane through some of the former World Cup topicals. Sharing the video, the brand wrote, “Let us prepare for the biggest #football festival in the world by taking a trip down the memory lane with #Amul Topicals! Music Credit: Ricky Martin – The Cup of Life”.

Over the years, the brand has created unique doodles on trending topics from across the world. Be it on Virat Kohli’s outstanding performance at the ongoing T20 World Cup or Bollywood actor Amitabh Bachchan’s 80th birthday. The brand also poked fun at the French midfielder, Zinedine Zidane. The player was given a red card for headbutting the Italian defender Marco Materazzi during the 2006 World Cup match in Germany. In 2010, the brand made a topical on singer Shakira’s Waka Waka (This Time for Africa).

Let us prepare for the biggest #football festival in the world by taking a trip down the memory lane with #Amul Topicals!

Since being shared, the clip has amassed more than 3 lakh views on Twitter. Netizens loved the nostalgia trip, a user commented, “Thank you for being part of the journey of our life. Amulya contribution.” Another user wrote, “A trip down the memory lane with #Amul legendary one-liners! @Amul_Coop How do you guys come up with these! Hats off!”.

The mega sports tournament takes place every four years and attracts football fans from all over the globe. This is the first-ever World Cup to take place in the Middle East. Over the next month, players from the national teams of 32 countries will compete in a series of elimination games, culminating on December 18, when one national team will be crowned the 2022 World Cup Champion.

In the first match at the Al Bayt Stadium in Al Khor, the Ecuadorian team will clash with the host team, Qatar. Prior to Qatar’s opening match against Ecuador, the Qatar World Cup opening ceremony will take place at Al Bayt Stadium.

Judges Reluctant To Grant Bail For Fear Of Being Targeted: Chief Justice