Barge P305 has been located on the seabed after systematic search by INS Makar employing advanced side scan sonar while search for the missing personnel will continue through the night, he said. 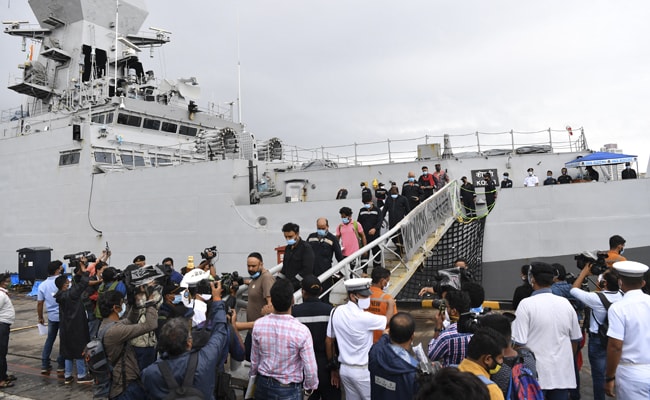 Barge P305 which sank during Cyclone Tauktae fury six days ago was located on the seabed on Saturday, the Navy said, while it continued the search for 20 missing personnel from two vessels.

There was no trace yet of nine personnel from barge P305 and 11 from tugboat Varaprada while the death count on P305 rose to 66 with the recovery of six more bodies during the day, a Navy spokesperson said.

Barge P305 has been located on the seabed after systematic search by INS Makar employing advanced side scan sonar while search for the missing personnel will continue through the night, he said.

“So far, 66 mortal remains have been recovered. The SAR ops are continuing through the night,” the spokesperson said.

“To augment the ongoing SAR ops for the missing crew of Barge P305 and Tug Varaprada, specialised diving teams onboard INS Makar with side-scan sonar and INS Tarasa sailed out early morning today from Mumbai,” the Navy spokesperson had tweeted earlier in the day.

While all the 440 persons on barges Gal Constructor and Support Station 3 (SS-3) and drillship Sagar Bhushan were brought ashore to safety, Naval and Coast Guard vessels and aircraft scoured the waters off the Mumbai coast as the search and rescue operations entered the sixth day on Saturday.

Struggling to establish the identity of almost half the victims of the P305 barge tragedy, police initiated the process of conducting the DNA testing of the bodies, an official said on Saturday.

A Mumbai police spokesperson said the Navy has handed over the bodies recovered so far to the city police. As many as 41 bodies were handed over to the relatives after the completion of formalities, he said.

Barge P-305, which housed personnel engaged in maintenance work of an offshore oil drilling platform of state-run oil and gas major ONGC, sank on Monday evening off the Mumbai coast during the cyclone. The barge had gone adrift in the cyclone fury before sinking.

Some bodies are decomposed, some others have deep injuries and therefore they are beyond recognition, the official said.

Blood samples of those who died and their immediate relatives are being collected and sent to the Forensic Science Laboratory at Kalina in Mumbai, he said.

“After the samples are matched, the bodies will be handed over to the respective family members,” he said, adding that the DNA sampling process is expected to be completed in the next three days.

RT-PCR tests to ascertain whether the victims had COVID-19 infection were also conducted, he said.

Mumbai police have also announced they will conduct a probe as to why the ill-fated barge remained in the turbulent area despite warnings about cyclone Tauktae, an official said. The police have also registered accidental death reports in connection with the death of the personnel on the barge.