Mamata Banerjee and governor Dhankhar have faced off on post-poll violence from the day she was sworn in as Chief Minister of Bengal for the third time. 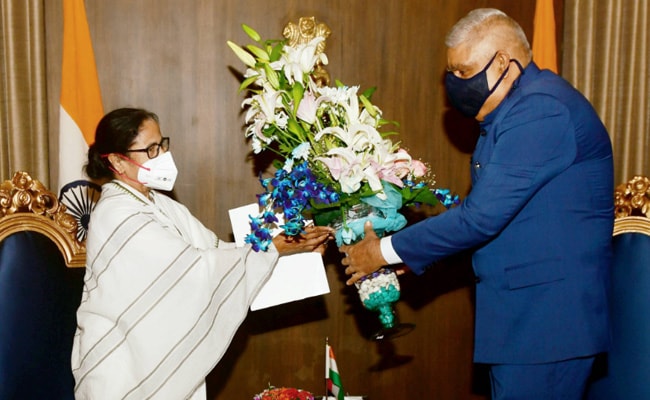 West Bengal Chief Minister Mamata Banerjee and governor Jagdeep Dhankhar once again found themselves in disagreement on Wednesday – this time over his plans to visit Cooch Behar district to meet, as he put it in several tweets, people affected by post-poll violence.

As per his tweets, Mr Dhankhar is to visit the Cooch Behar district tomorrow. On Friday, he plans to visit camps in Assam where alleged victims of violence in Bengal have fled for shelter.

In a letter to the governor today, Mamata Banerjee requested him not to break “well-established norms” and go off on unilateral visits across the state.

“I find from social media that you are unilaterally proceeding to the district of Cooch Behar on 13.5.2021 and sadly I find that to be violative of the long-standing norms as evolved over several decades,” Ms Banerjee wrote.

“I therefore would expect that you will kindly follow the well-established norms of protocol and desist from abrupt decisions with regard to field visits,” she added.

Within an hour or so of her letter becoming public, the governor responded with his own two-page letter in which he wrote of “elementary ignorance of constitutional provisions”, that he was “appalled” she thought he needed her government’s permission to go anywhere and that he was “not persuaded” by her stance for which “there would be no sane takers”.

The letter does not categorically spell out whether the governor will continue with his visit to Cooch Behar tomorrow or not.

Mamata Banerjee and governor Dhankhar have faced off on post-poll violence from the day she was sworn in as Chief Minister of Bengal for the third time. After the ceremony, Mamata Banerjee made brief comments about her government’s immediate priority which, she said, was Covid management.

The governor then took the microphone and said post-poll violence should be addressed immediately.

Mamata Banerjee took the mic back from him and said the post-poll violence had taken place at a time when the Election Commission was in charge of law and order in the state.

In an interaction with the media sometime later the same day, the governor insisted that Mamata Banerjee was in charge when clashes erupted.

On Monday, after swearing-in 43 ministers of the Mamata Banerjee government, the governor addressed the media and said he had told the government he wanted to travel to the violence-hit areas but the government’s response was “non-responsive”. He then announced he would therefore be making his own arrangements.

On Tuesday, the governor announced he would be taking a BSF helicopter to Sitalkuchi and other areas in Cooch Behar, landing at 11 am.