Beverly Cleary was named a “Living Legend” by the US Library of Congress in 2000, and awarded the National Medal of Art from the National Endowment for the Arts in 2003 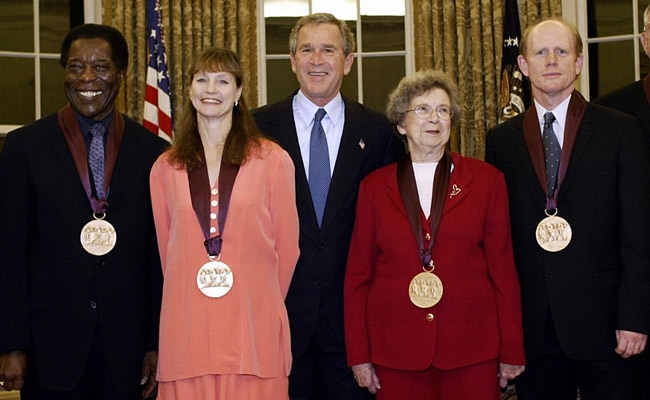 Beverly Cleary (in red) died on Thursday in Carmel, California, her home since the 1960s

American children’s author Beverly Cleary, the creator of iconic characters including Ramona Quimby and Henry Huggins, has died at 104, her publisher said Friday.

The librarian-turned-writer died on Thursday in Carmel, California, her home since the 1960s, Harper Collins Publishers said in a statement.

With titles like “Henry Huggins” (1950) and “Ramona and Her Father,” (1978) beloved by generations of young readers, Cleary’s works explored everyday life through the eyes of children. And she did it with wit and sympathy, touching on topics ranging from lunchroom antics and sibling rivalries to a parent’s job loss.

Cleary was inspired to start writing when “a little boy faced me rather ferociously across the circulation desk and said: ‘Where are the books about kids like us?'” her publisher quoted her as saying.

“I wanted to read about the sort of boys and girls that I knew in my neighborhood and in my school,” she told NPR in 1999.

“And in my childhood, many years ago, children’s books seemed to be about English children, or pioneer children. And that wasn’t what I wanted to read. And I think children like to find themselves in books.”

Cleary published more than 40 books, with more than 85 million copies sold. They were translated into 29 languages.

“Henry Huggins,” her first book, about a third-grader who adopts a skinny stray dog named Ribsy, was an immediate hit. From there, she wrote more books about Henry and his friends on Klickitat Street in Portland, Oregon.

The most famous of the gang was Ramona Quimby, a young girl full of sass and moxie, living by the motto: “A littler person sometimes had to be a little bit noisier and a little bit more stubborn in order to be noticed at all.”

In addition to a long list of literary accolades, Cleary was named a “Living Legend” by the US Library of Congress in 2000, and awarded the National Medal of Art from the National Endowment for the Arts in 2003.

Nawaz Sharif’s Party Rules Out His Return To Pakistan Until His...