Villagers at Bamhaur Khas say over the last 25 days, there have been 34 deaths — way above usual. The residents also say around 70 per cent people are sick. 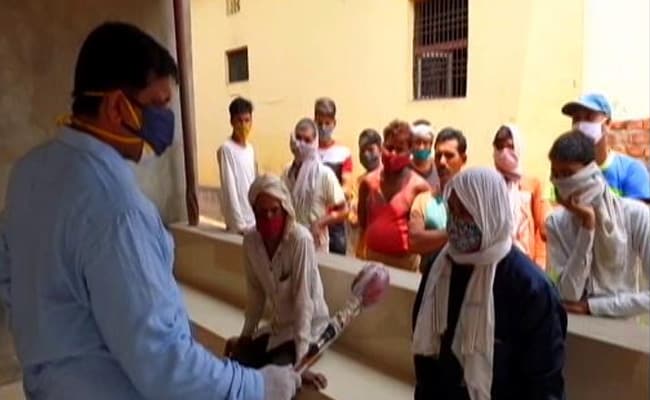 The Bihar government said over the last 24 hours, 7,752 fresh cases of Covid have been reported

The official Covid figures from Bihar — both the number of infections and deaths — on the way up, the Nitish Kumar government has extended lockdown till May 25. But a visit to the Bamhaur Khas village in Kaimur district, 195 km from state capital Patna, raises questions about how many cases are going unreported.

Official figures of Kaimur district tweeted by the state health department this evening, reports 23 fresh Covid cases. There is no mention of the number of deaths.

Villagers at Bamhaur Khas say over the last 25 days, there has been 34 deaths — way above usual.  The residents also say around 70 per cent people are sick.

The villagers say most of the people died from Covid-like symptoms, sometimes untested, sometimes before test results came in.

“First it was fever. Then there was cough and later she died. There was a corona test but we didn’t wait for the report,” said Ashok Kumar Choudhary, who lost his aunt.

Another villager, Alok Kumar Singh, lost his father after he got the second dose of vaccine.

“After the second vaccine dose, he got a fever. He was a heart patient and also had blood sugar. We took him to a hospital and there he was given an injection. But he did not survive,” he said.

“There have never been so many deaths in so short a time. We believe these are due to coronavirus,” he added.

Villagers claim while most of the people had Covid-like symptoms, they were tested initially for malaria and typhoid. Due to lack of tests in most cases, Covid was not cited as a reason of death, they said.

“First it was malaria then the typhoid tests. When my oxygen level dipped, I was given oxygen support for 36 hours,” said Kamta Prasad Pandey, a patient, who is yet to recover fully.

The villagers even say some couldn’t survive the medicine given for typhoid.

While the villagers say around 70 per cent people are sick, the state government is yet to acknowledge the severity of the issue. Asked about the issue, officials said they will look into it.

Today, the Bihar government said over the last 24 hours, 7,752 fresh cases of Covid have been reported, taking the total count of active cases in the state to 96,277.

The second wave of Covid, which surfaced in March, has now spread to the countryside even as it ravages the cities. The toll in rural India is suspected to be far more than the official figures, with the rickety healthcare system unable to handle critical patients in the best of times.

Over this week, hundreds of corpses, suspected to be of Covid patients, have been flowing down the river Ganga, creating shockwaves across the country.

It has triggered a dispute between Bihar and Uttar Pradesh, with the Nitish Kumar government claiming that the bodies were dumped in Uttar Pradesh and flagging the danger to heath they pose in the villages on the riverbanks.

Yesterday, the chief of National Mission of Clean Ganga issued an order barring the dumping of bodies into the river.

“Dumping of bodies/partially burnt bodies/decomposed corpses in the rivers not only causes pollution in the river, but is also unhygienic and increases the risk of spreading infections in the communities inhabiting along the along the banks of the rivers, warranting emergency measures,” the order read.