The farmers have reiterated their stance on talks, urging the Centre to initiate negotiations. 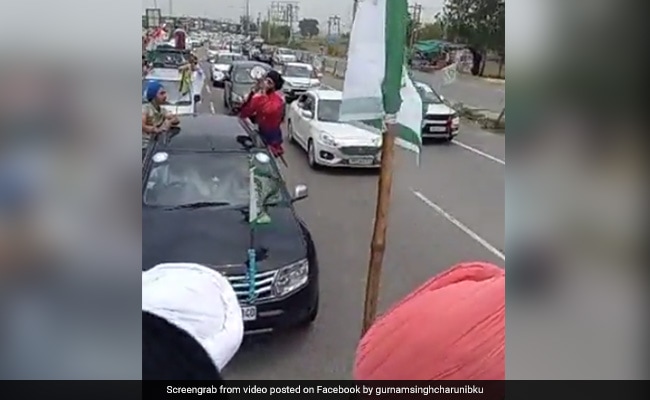 On reaching Singhu, the farmers will perform langar service for a week as part of the protest.

Thousands of farmers today set off from Karnal, Haryana, for the Singhu border point near Delhi where they plan to observe ‘Black Day’ on May 26, marking six months of the ongoing protest against three central farm laws.

Led by Bharat Kisan Union (BKU) leader Gurnam Singh Charuni, the famers set off from the Bastada toll plaza in Karnal in hundreds of vehicles. They will perform langar seva for a week after reaching the Delhi border, the farmer leader said.

“The farmers have set off from Karnal so that the agitation in various districts of Delhi is well represented,” Mr Charuni said.

Haryana is under a lockdown due to the recent surge in Covid cases in the state. The state government has blamed the farmers protesting along Haryana’s borders for the surge in rural areas.

Thousands of farmers have, for the past many months, been protesting against the Central government’s three agricultural laws passed last year: the Farmers’ Produce Trade and Commerce (Promotion and Facilitation) Act, 2020, Farmers’ (Empowerment and Protection) Agreement on Price Assurance and Farm Services Act, 2020, and the Essential Commodities (Amendment) Act, 2020.

Besides their roll-back, the farmers also want a new law made to guarantee minimum support price for crops.

They have camped along various points like Kundli and Singhu along Delhi’s border, refusing to back off despite the ongoing Covid crisis in the country.

Hitting back at allegations that the protest may prove disastrous amid the pandemic, Mr Charuni today said it was the government that was spreading the infection.

“The government is blaming the farmers only to hide its own ineptitude. It has no ambulances, beds, or hospitals. We have our own compulsions, but why is the government organising programmes where crowds gather?” he said.

The BKU leader also reiterated the farmers’ stance that they are ready for talks. On Friday, the Samyukta Kisan Morcha (SKM), an umbrella body of over 40 farmer unions, wrote to Prime Minister Narendra Modi, urging him to resume talks.