More than 125,000 British citizens live in the New York metropolitan area, and not a single one of them is expected to show up for work next Monday morning, nor the following Friday afternoon.

That is because England will be playing its first two World Cup matches those days, the opener against Iran and the second against the United States. That’s before the Brits close the opening round against Wales on Tuesday, November 29 at 2 p.m. ET.

Hopes are high for the team representing England, which is looking for its first World Cup title since 1966, when the championship game was played at Wembley Stadium. It has been 56 years since that moment of glory, and every British pub in Manhattan, an international city, will be expecting a wall-to-wall crowd of fans wearing some version of the Union Jack.

For Brits living in New York, this will be the first time punters (British slang for gamblers) can legally wager on the outcome. But because wagering choices are more limited in New York than what Brits are used to across the pond, a group of American entrepreneurs has come up with a wagering platform, Paradox, that offers bets that cannot be found on your garden variety smartphone.

Take for instance, the possibility that England goalkeeper Jordan Pickford, who plays professionally for Everton, will get through the first three games without allowing a single goal.

But when it comes to something special for Everton fans, and those who feel Pickford is a shutout machine, holding three consecutive opponents scoreless is not on the board. But that does not mean it is not available anywhere.

That is where businessman Parth Patel, who founded the cryptocurrency Root, came up with the idea of partnering with Zachary Panos and Adam Winiecke, founders of Paradox, where users and market participants will be able to bet on the event using some denomination of Root, an ethereum-based cryptocurrency. This enables a novel “Bet to Earn” market type in which users can create wagering markets on just about anything they choose, and that market then goes live on the platform.

The Pickford market looks like this on the app: 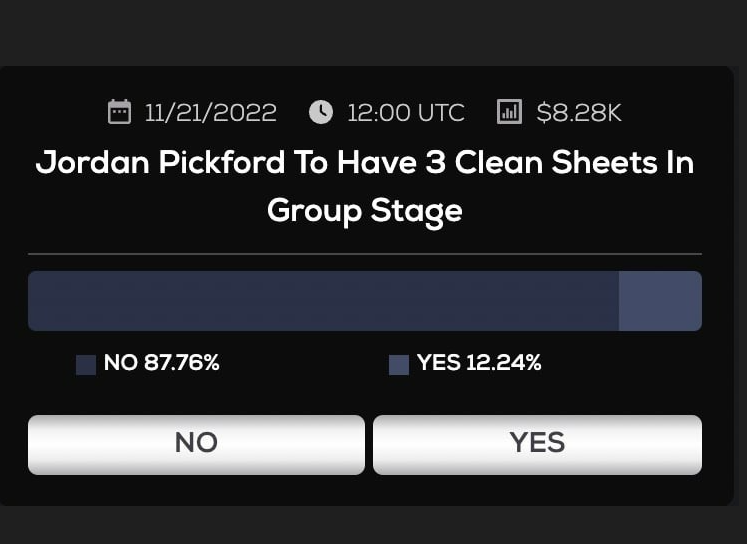 Everyone with the same position gets the same odds, based on the market price at the time the event starts. In the case of the World Cup, the odds will lock in at kickoff. Root-Paradox will bring a unique offering, enabled by smart contracts (crypto jargon for a legal agreement), to sports betting.

From a creativity standpoint, Paradox enables gamblers to create markets that the big sportsbooks are either uncomfortable listing, or too uncreative to create.

Harry Kane of England is listed at +700 on DraftKings to be the tournament’s top goal scorer, while FanDuel has him at +750 to win the “Golden Boot” — the award that goes to the top goal scorer. FanDuel also has England at -1100 to advance out of the group stage, while the United States is -105, Wales is +105, and Iran is +305.

But for Brits, wagering on something at -1100 odds is about as exciting as drinking a pint of milk rather than a pint of Mad Squirrel.

Wagering on the consecutive clean sheets (soccer jargon for a goalkeeper shutout) is another matter, and as any avid British football fan knows, Bickford has three of them this season, and had 14 in 38 games in the 2018-19 English Premier League season.

Who should start for England in the World Cup?

What Else Can Be Wagered on This Platform?

Just about anything, which is what makes Paradox interesting.

“Betting can be better for the bettors because you can create a more fair betting market, including ones that do not exist today,” he told Casino.org Tuesday in a telephone interview.

One day, the NBA is going to expand. LeBron James has already said be wants to be involved in the ownership group of an expansion team in Las Vegas, and many people believe Seattle is a lock to get a second expansion franchise because it had a fervent fan base when the Seattle SuperSonics were based there before moving to Oklahoma City.

Little known fact: The relocation deal that ended up with the Thunder in Oklahoma City had a fine-print component in which all of the Sonics’ team records have remained Seattle records that will transfer over to the next NBA team that sets up shot in that Pacific Northwest City.

But last week, NBA deputy commissioner Mark Tatum told Marc Spears of Andscape that Mexico City is in the running for an expansion franchise, especially since the G-League Capitanes are having success playing at Arena CDMX, which seats 22,300 and is where the NBA plays its annual Mexico Games.

So this means one of two things:

And when you consider that NBA owners lost untold amounts of money during the pandemic, along with the fact that an expansion fee could go in the area of $4 billion if the Phoenix Suns are sold for more than $3 billion, as has been speculated, there is quite a lot of potential money to be divvied up among the 30 current owners from expansion fees.

If four teams are added for $4 billion apiece, each current owner would get 1/30th of those fees, which amounts to $533,333,333 for Mark Cuban, Mickey Arison, Michael Jordan, Janie Buss and their ilk.

The other big question would be when? And on Paradox, that could be wagered: 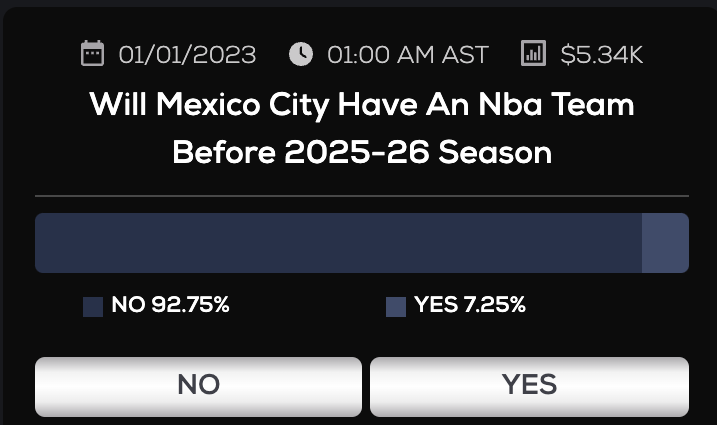 It is a safe bet to say that these folks are onto something, and only time will tell whether it is a success.