Mansukh Hiran’s statement to the police was recorded by Sachin Waze while he was heading the Crime Intelligence Unit. But at the time, he did not record his February 17 meeting with Hiran. 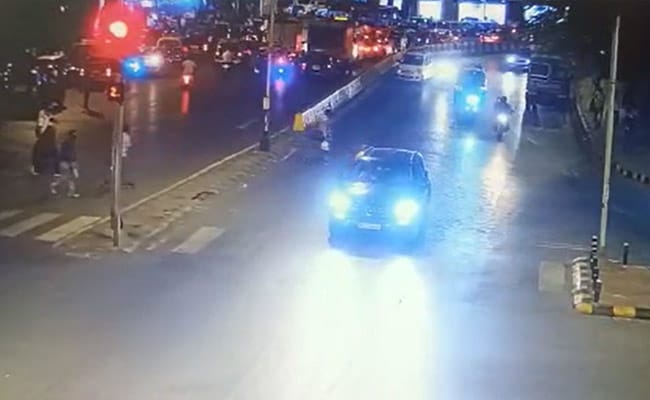 Investigators said Sachin Waze was driving the Mercedes and Mansukh Hiran joined him.

Mansukh Hiran, the owner of the explosives filled SUV found near Mukesh Ambani’s house, is suspected to have handed over the keys of the vehicle to police officer Sachin Waze on February 17 during a meeting at Mumbai’s Fort area, sources told NDTV. Sachin Waze, a controversial officer who was initially in charge of the investigation, has already been arrested in the case.

Mansukh Hiran had left his Scorpio car on the Vikhroli Highway on February 17.  A CCTV footage of the same evening — around 8.25 pm — from the Fort area shows the businessman crossing a road and getting into a black Mercedes waiting at the signal with its hazard lights on.

Investigators say Sachin Waze was driving the Mercedes and suspect that this was the meeting during which Mansukh Hiran handed over the keys of the Scorpio to him.

Mansukh Hiran had claimed that he had parked his Scorpio on the highway in the Vikhroli area of central Mumbai and hired a taxi to reach Crawford Market in south Mumbai. The next day, he realised that his SUV was stolen.

His statement to the police was recorded by Sachin Waze while he was heading the Crime Intelligence Unit. But at the time, he did not record his February 17 meeting with Hiran.

A week later, the Scorpio was found abandoned on Carmichael Road, around 1.4 km from Antilia, Mukesh Ambani’s 27-storey home in south Mumbai, on March 4.  A bomb disposal squad found 20 gelatin sticks in it, and a letter addressed to the Reliance chairman and Nita Ambani.

Mansukh Hiran, 45, who was also an auto parts dealer, was found dead near a creek near Mumbai on March 5. He was reported missing a few days before that.

The Thane-based businessman had earlier alleged that he was being harassed by police officers and journalists and had written to Chief Minister Uddhav Thackeray, Home Minister Anil Desmukh and the Mumbai police chief, demanding protection.

The Maharashtra Anti-Terror squad, which was investigating the matter, has claimed that Sachin Waze was involved in the death of Mansukh Hiran. The suspended officer is in the custody of the National Investigation Agency, which is investigating the Ambani bomb scare case.

Sachin Waze, who had earlier quit the police force and joined the Shiv Sena — was reinstated after the Covid outbreak.