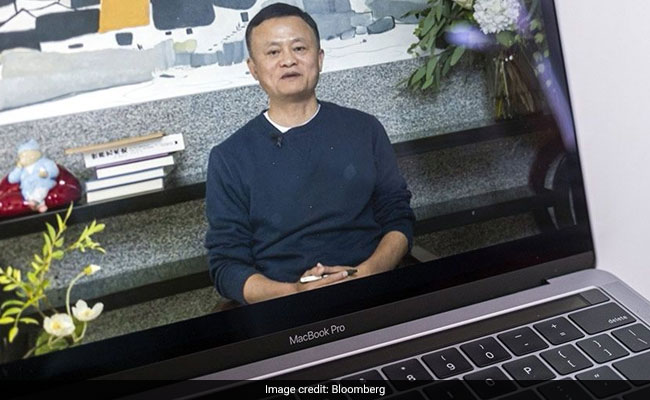 Regulators have worked to check Ant Group’s influence, and the future is looking a lot less profitable.


It’s been eight months since Jack Ma, the most famous business executive China has ever produced, all but dropped from public view. Eight months and, by conservative estimates, some $70 billion.

That’s the optimistic view on how much Ma’s Ant Group Co. has plummeted in value since the outspoken billionaire openly pushed back against Beijing-and Chinese authorities promptly quashed Ant’s plans for a blockbuster initial public offering. Inside Ant, the financial-technology giant Ma spun out of Alibaba Group Holding Ltd., the real costs are still being tallied. Followers of “Daddy Ma,” China’s answer to Jeff Bezos, have been brought to heel by higher powers: China’s president, Xi Jinping, and his right-hand man on the economy, Liu He.

A team from the nation’s top financial regulators now demand regular updates from Ant Chief Executive Officer Eric Jing and his staff on the progress of a state-ordered business overhaul, according to people familiar with the matter. New initiatives must be vetted by officials. And authorities have discussed installing a government representative in Ant’s senior executive ranks to keep tabs on the company, says one of the people, who asked not to be identified speaking on a sensitive issue. 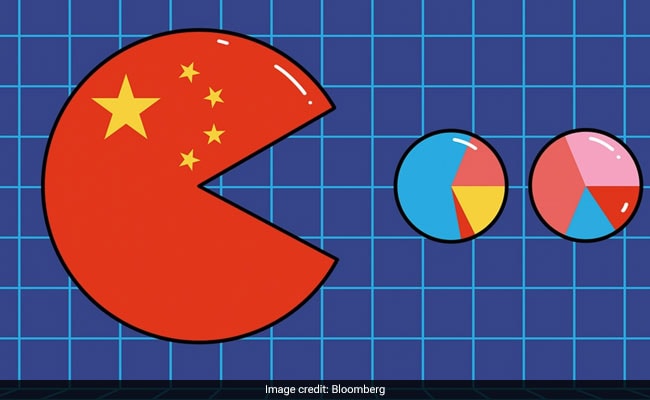 A team from China’s top financial regulators now demand regular updates from Ant Chief Executive Officer and his staff on the progress of a state-ordered business overhaul, according to people familiar with the matter.

So it goes across big tech in China, where freewheeling, internet-age capitalism, and the wealth and influence it brings, has collided with the aims and ambitions of the Chinese Communist Party. What regulators describe as “rectification” is under way, and it’s also affecting the finance operations of Tencent Holdings Ltd., JD.com Inc., TikTok owner ByteDance Ltd. and ride-hailing giant Didi Chuxing. U.S. and European officials have been wondering for years what to do with the big tech companies that have amassed so much power. China’s answer is to assert control.

In fintech, that means forcing upstarts like Ant to behave more like old-fashioned banks. It also means tipping the balance of power in the nation’s huge, debt-ridden financial industry back toward well-connected state-owned banks that toe the party line. Beijing says China’s big Internet and fintech companies have abused their market power. Xi wants to bridle innovators without strangling innovation and reduce financial risks without diminishing economic rewards. The question is, can he?

Ant and its peers have taken some hard blows. Regulators have worked to check their influence, and the future is looking a lot less profitable. Lending online to hundreds of millions of Chinese, the biggest engine of growth, is forecast by Bloomberg Intelligence to shrink 23% over five years, as will money flowing to investment products sold by fintech platforms. The payments ecosystem will now be closely policed. “We are entering a period of major upheaval as Beijing reshapes its relationship with tech giants-expect tighter controls to stay here long-term,” says Beijing-based Liao Ming, a founding partner of Prospect Avenue Capital, which manages $500 million in assets. “Beijing’s priorities have shifted.”

The trouble began in October, when Ma publicly lambasted global financial regulators and conventional bankers. He said they were out of touch and stifled innovation. In a little over a week, the Ant IPO was put on ice. Authorities have since issued new rules on everything from consumer lending to leverage to monopolies in online payments. Regulators and state media have tapped into strands of popular resentment toward China’s hyper-wealthy moguls, criticizing the companies for miring the poor and the young in debt.

More than a dozen technology companies have been told they may need to restructure their financial divisions into entities that will be more like banks and supervised by the People’s Bank of China. Everything from how consumer data is collected and used, to how loans get made, and to whom, is under scrutiny, as are overseas listings and ownership structures.

First up is Ant. Its most-lucrative business-extending small online loans to shoppers in partnership with banks-is now capped at less than 300 billion yuan ($46.4 billion) under a newly licensed unit, from more than double that and growing a year ago, Jefferies’ Hong Kong-based analyst Shujin Chen estimates. Adding to the strain, state banking partners are pulling back from fintech at the behest of regulators. “The power dynamics have shifted in that state entities will be ever-more vigilant of fintech activities,” says Joel Gallo, CEO of Guangzhou-based consulting firm Columbia China League Business Advisory Co. 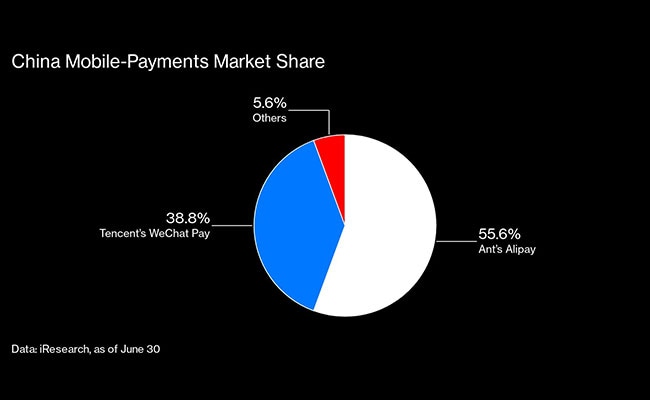 More pain lies ahead. Ant and rival Tencent have been told to sever the “improper links” that long steered a billion users of their ubiquitous payment apps-Ant’s Alipay and Tencent’s WeChat Pay-toward higher-paying services such as loans and fund management. Regulators have yet to rule on how the two companies, which dominate mobile payments, can direct traffic on their apps and use the wealth of data they gather.

And the PBOC is weighing new rules for curbing monopolies in online payments, while at the same time trying to launch a venture that would take charge of the data those platforms collect and share it with rivals. “The Chinese government implemented regulations too little, too late to prevent Alipay and Tencent’s payment business from dominating the industry,” says Singapore-based Zennon Kapron, managing director of consulting firm Kapronasia. “Although they are homegrown champions, the Chinese government prefers a more balanced market.”

The sudden turn in fortunes is brewing discontent. A number of Ant employees, including senior executives, are actively hunting for other jobs as they become concerned about the dwindling value of their stock options, says Lion Niu, director at Beijing-based recruitment company CGL. Jing, who took the reins after former CEO Simon Hu unexpectedly resigned in March, has promised employees that the company will eventually go public. But what the recent upheaval will mean for the company’s valuations is still unknown.

Earnings multiples of traditional finance companies would value Ant somewhere between $29 billion and $115 billion, according to Bloomberg Intelligence analyst Francis Chan. That’s well below the $320 billion that it was expected to fetch last year. Ant’s early investors are more positive. Fidelity Investments, which owns 0.14% of Ant, has halved its estimate to about $144 billion at the end of February from $295 billion earlier. Warburg Pincus, with a 0.33% shareholding, has pegged it somewhere between $200 billion to $250 billion.

Shares of Alibaba, which owns about a third of Ant, have slumped almost 30% since early November.

The stakes are high. In March, Tencent plunged on a Bloomberg News report that it would have to fold its financial business into a holding company, supervised by the central bank. About $37 billion of market value was wiped out in a day. Two months later, local media reported that regulators had called for the overhaul.

JD Technology, an arm of JD.com, China’s No. 2 e-commerce site by net income, is waiting for clear instruction from the authorities before making any attempt to push deeper into finance, according to a person familiar with the matter. JD was widely ridiculed last year after it ran an ad showing a low-income worker borrowing money to pay for an airline upgrade. Some called for a customer boycott. Representatives for Ant and Tencent declined to comment, while JD Technology, the PBOC and China’s banking regulator didn’t respond to requests for comment. 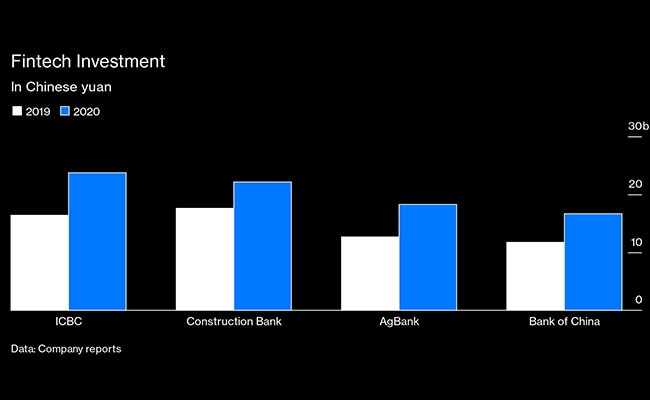 “The rules foisted upon fintechs have taken off some of the luster of invincibility they have enjoyed,” says Gallo. Meanwhile, the big banks are pressing their advantage. Last year, they collectively invested a record $31 billion in fintech. At Industrial & Commercial Bank of China Ltd., the world’s largest bank by assets, spending jumped 40%. ICBC hired 800 people in technology, bringing its total workforce in that one area to 35,400. Its banking app increasingly mimics Alipay, bundling travel, entertainment, and dining options, with a host of financial services for its 416 million users.

Shares of China Merchants Bank, the retail banking leader, have soared almost 60% since Ant’s IPO was suspended. Ant was told to shrink its money-market fund, once the world’s largest. At the same time, Merchants Bank, based in the tech hub of Shenzhen, has opened investment products once reserved for the rich to mass-market clients with as little as 100,000 yuan to invest. Its retail assets under management climbed by a record of 650 billion yuan in the first quarter, to 9.6 trillion yuan.

Traditional banks in China have long struggled to size up customers who don’t have collateral or credit histories. Platforms like Ant helped revolutionize lending by crunching reams of new data from their payment systems, social media, and other sources to evaluate creditworthiness. Even when regulators ordered 13 top platforms to rein in their finance operations, they acknowledged the crucial role fintechs have played in improving efficiency and access and lowering transactions costs. “The intent is not to kill them,” Bernstein analyst Kevin Kwek says of the fintechs.

Ordinary people in China are hungry for loans. Yang Mei operates a small beauty parlor in the southwestern city of Chengdu. The 30-year-old got a 5,000 yuan loan via Ant last September to help pay for various beauty products. The rate: 185 yuan for three months, the rough equivalent of a 14.8% annual rate, which she calls “reasonable.” She hoped to get another loan to fund an expansion but put those plans on hold after Ant was forced to restrict lending. She says she’s reluctant to borrow elsewhere because she trusts the Ant brand.

Li Lin, who owns a food processing factory in Sichuan province that churns out dairy products and hotpot sauce, says he’s having a hard time getting loans from state-owned banks. He says even local banks are stingy with small business owners, who aren’t considered prime clients. Li, 40, says he and fellow entrepreneurs continue to use small online lenders that fly under the radar of regulators and charge usurious rates pegged to the principal even after half the loan is repaid.

“It’s been extremely hard for small companies to get financing from state banks, and loan costs for us are very high,” says Li. “It makes conducting business very challenging.”