A new applicant has filed to serve as a sports betting proprietor in Ohio, but the regulatory body overseeing the licensing process has already said at least part of that request will be denied.

Robert L. Stark Enterprises, Inc. submitted its paperwork to serve as a host for both an online – a Type A license – and a retail sportsbook – a Type B license – on Oct. 17, according to data from the Ohio Casino Control Commission (OCCC). According to Ohio Secretary of State business records, the company does business as Stark Enterprises, a Cleveland-based real-estate development firm.

According to the company’s website, Robert Stark founded the company 44 years ago while studying law at Case Western Reserve University. He still serves as the president and chairman of the company, but he stepped down as its CEO in May. His son Ezra now holds that position.

Stark Enterprises’ portfolio includes more than 50 properties in eight states. Not surprisingly, most of those developments are in Ohio, particularly the northeastern corner in and around Cleveland. The developments include retail plazas, multi-family housing, office buildings, student residences, parking lots and garages, and mixed-use developments.

The company has yet to respond to a request for comment.

Stark Enterprises has not yet revealed who it will partner with for either its online license or its retail sportsbook. However, its application with the OCCC indicates the retail sportsbook would be located in Cuyahoga County, where Cleveland is located.

And that’s the problem.

OCCC Director of Communications Jessica Franks told Casino.org after Wednesday’s meeting in Columbus that the agency has no choice but to deny Stark’s application to host a retail sportsbook.

Because they applied in Cuyahoga County and we have already issued the maximum number of type B licenses for that particular county, we are precluded by law from issuing additional licenses,” she said.

Stark is not alone. Two other Cleveland-based businesses, Ravencrest Partners LLC and JSJ Klub, LLC – also known as Harry Buffalo – have applied to host retail sportsbooks. PointsBet had initially applied to be Harry Buffalo’s retail operator, but it has since withdrawn that application. 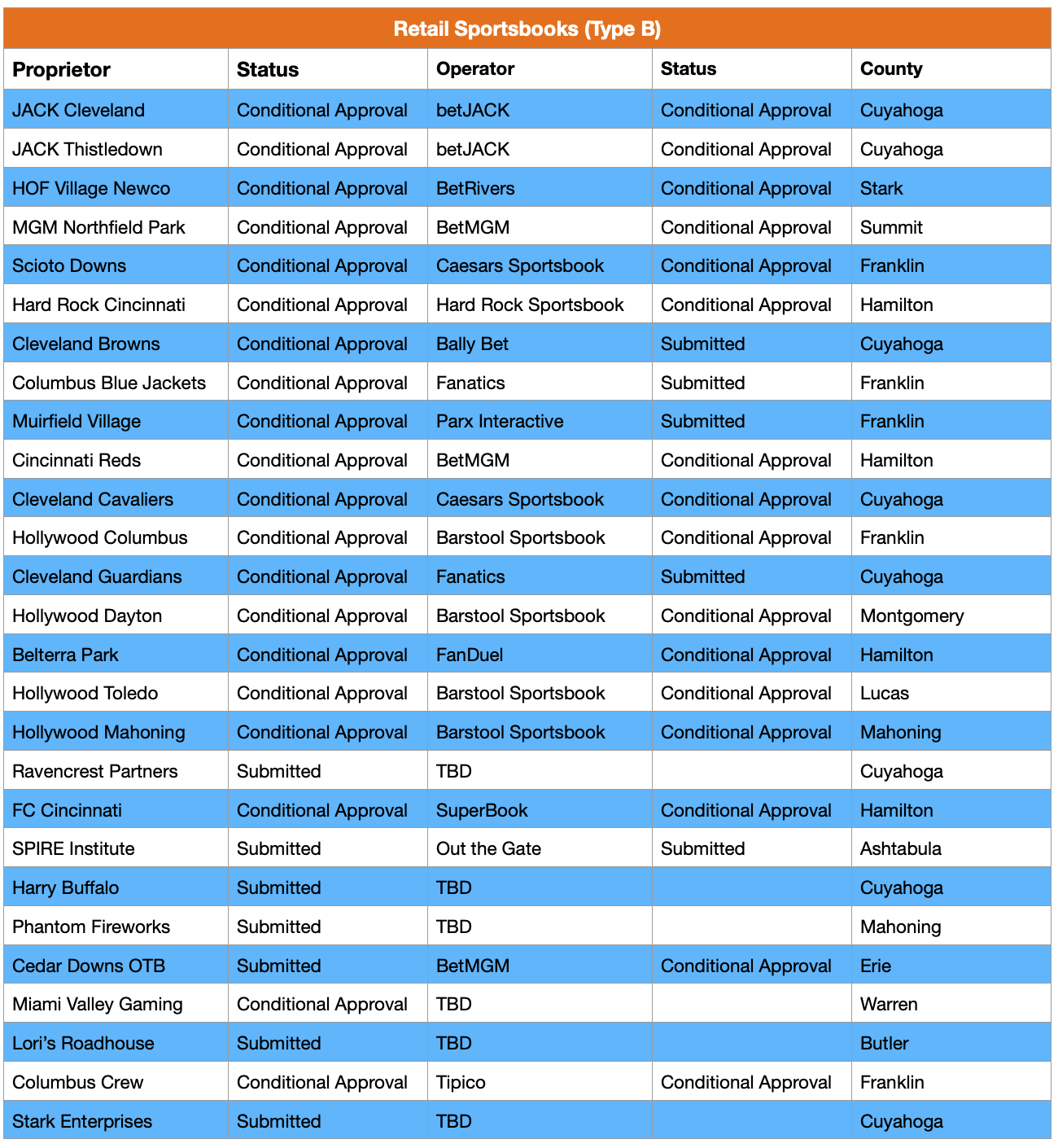 Through Wednesday’s meeting, the OCCC has conditionally approved 20 of the 27 companies that have applied to host a retail sportsbook. All but one of those conditionally approved are considered preferred applicants. The sports betting law gave preference to the state’s casinos, racinos, and professional sports teams to host brick-and-mortar and online sportsbooks.

It would appear that based on Frank’s comment, the only way Stark Enterprises or another applicant seeking a retail sportsbook in Cuyahoga would be if lawmakers were to amend the sports betting law to allow for more than five in a county.

For online licenses, the law allows for up to 25 proprietors. Just like with brick-and-mortar sportsbooks, casinos, racinos, and pro sports teams receive preference for online licenses too. Of the 23 proprietor applicants, the commission has approved 21. The only ones that have not are Stark and SPIRE Institute.

Ohio’s law also allows qualifying lottery retailers to apply to host kiosks. As of Wednesday, the OCCC has approved about 880 bars, restaurants, grocery stores, bowling alleys, golf courses, and other businesses to install kiosks. They said another 500 or so have been recommended by the lottery, but they have not applied.

Sports betting is set to start in Ohio on Jan. 1. Stark Enterprises applied after the July 15 deadline to launch on the starting date. 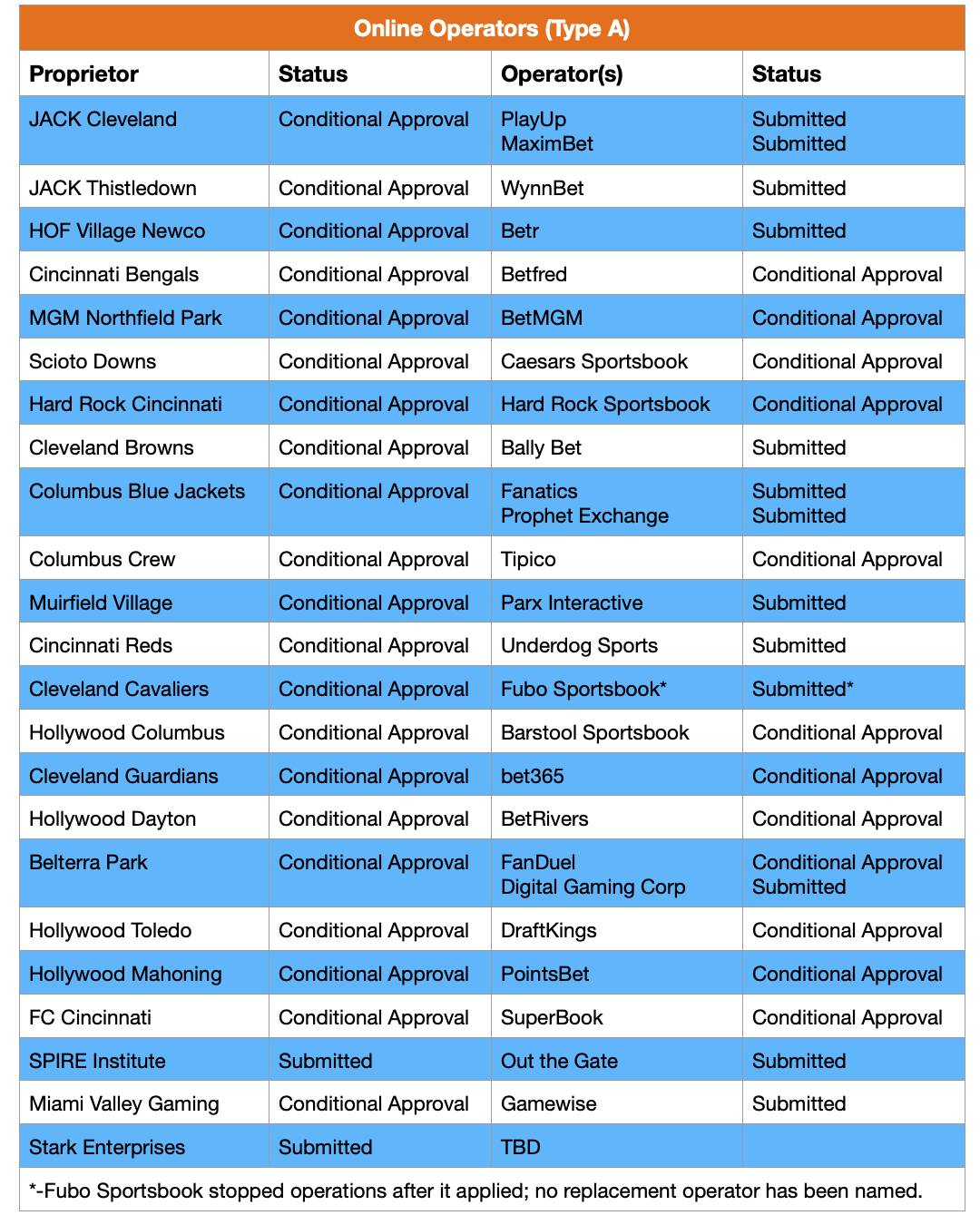