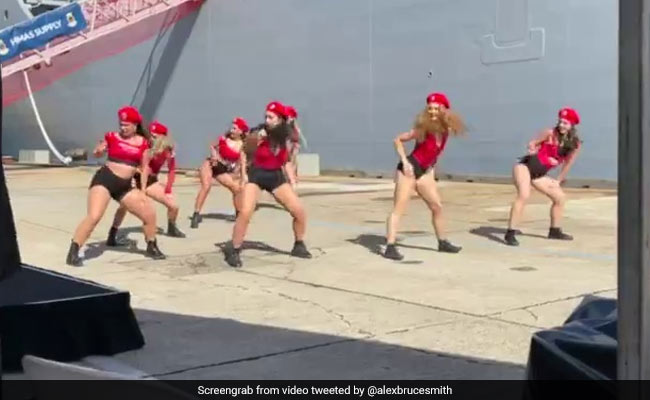 Footage of dancers at an Australian Navy event has created a controversy.


Footage of dancers twerking at an Australian military event has created a huge buzz in the country, with the Royal Australian Navy facing criticism over the dance performance that many deemed “inappropriate”. A troupe of dancers performed at the commissioning ceremony of the HMAS Supply, a new $2 billion navy ship, in Sydney on April 10, reports The Week. Footage of the dancers twerking, thrusting and gyrating surfaced on social media Wednesday and quickly went viral.

The video shows a group of seven women dancers dressed in black shorts and red tops, dancing in front of the HMAS Supply vessel. The dance performance at an official military event raised eyebrows. According to the BBC, conservative lawmakers led the chorus of voices criticising the dance, while tabloids in Australia called it a fall in military standards.

Philip Thompson, the MP representing Herbert in Queensland, questioned the need of having dancers at an official event and said, “Standards in the ADF, and definitely when commissioning a ship, should be a little bit higher than that.”

Sorry. Not appropriate.
Doesn’t matter who the girls are, this is not appropriate.
At a time when we are promoting the rights of women to not be objectified, there are other dance moves that would be fun and equally energetic.

Someone thought this was a good idea. ? https://t.co/kbl5VkLucf

not the most important thing about this i know, but the choreography kinda seems all over the shop

What started as criticism of the performance, however, has now spiraled into a story about inaccurate media coverage after it emerged that a clip of the performance had been wrongly edited by the national broadcaster, the ABC.

Prime Minister Scott Morrison said he was “disappointed” at the misreporting. “I think standards have failed and so I think obviously defence will look at these matters and make what changes they wish to in the future,” he said, according to The Guardian.

The ABC issued an apology for the way the video was edited. “The video should not have been edited in that way and the ABC apologises to the Governor-General and the Chief of Navy, and to viewers, for this error,” the broadcaster said in a statement.

Sachin Pilot Loyalists Want Resolution Of Issues Raised By Him In...