Saturday, August 13, 2022
Rajpostexam.com Single Spot For Worldwide Information And News
Home Trending News Covid Is Deadlier in Brazil Than India and No One Knows Why

When it comes to the scale of infections, the two nations are similarly matched, with cases hovering around 14 million and hospitals from Mumbai to Sao Paulo under increasing pressure as admissions continue to rise. 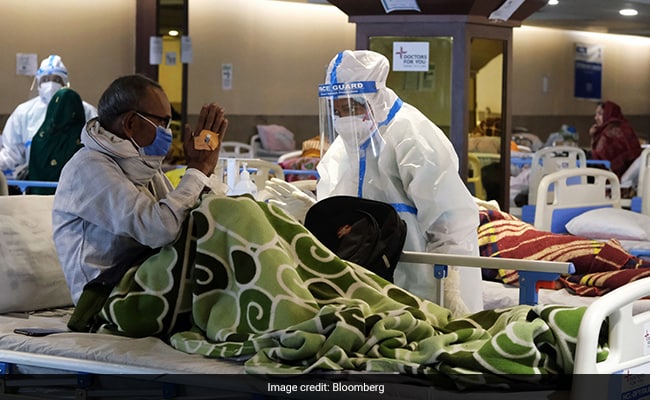 A health worker in PPE assists a patient at a makeshift Covid-19 quarantine facility.


Facing a sudden surge in coronavirus infections, India is once again home to the world’s second-largest outbreak, overtaking Brazil after the latter moved ahead in March. But behind the bleak statistical jockeying is an epidemiological enigma over why the Latin American country has been far more devastated by the pathogen.

When it comes to the scale of infections, the two nations are similarly matched, with cases hovering around 14 million and hospitals from Mumbai to Sao Paulo under increasing pressure as admissions continue to rise. But it’s the divergence in fatalities that has scientists puzzled. Brazil, home to almost 214 million, has seen more than 365,000 people die from Covid-19, more than double the number of deaths in India, which has a far greater population of 1.4 billion. 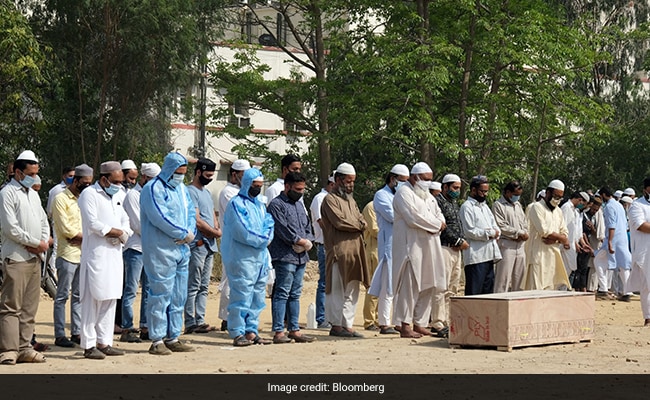 People pray while attending a funeral service for a Covid-19 fatality at a burial ground in New Delhi, India, on Tuesday, April 13, 2021.

While deaths in India have started climbing and threaten to get worse, the macro-level disparity remains and is emblematic of different ways in which the pandemic is playing out across regions. Experts say this needs to be better understood and decoded, to contain this global outbreak as well as avoid future public health crises.

Covid death ratios in South Asia, including India, are consistently lower than global averages, just as those in Latin America are consistently higher, forcing virologists to offer a number of theories as to why Covid has cut a more deadly swathe from Brazil to Argentina. 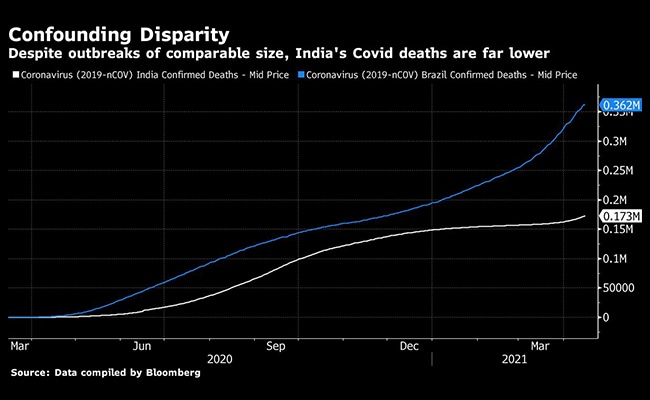 “We’re not comparing apples to apples here, we’re comparing apples to oranges,” said Bhramar Mukherjee, the biostatistics chair at University of Michigan’s School of Public Health. For now, both countries present an “intriguing puzzle — an epidemiological mystery that needs a Sherlock Holmes or Miss Marple in action.”

Brazil has been hit by multiple waves killing an alarming number of its young and it reported a record one-day jump of 4,000 Covid-19-related deaths last week. Meanwhile, India’s daily surge in casualties have been more than 1,000 in the past few days and was well below that last week. Deaths in the Asian country as a percentage of confirmed cases is 1.2 versus 2.6 in Brazil, data compiled by Bloomberg show.

Multiple factors could be at play in the fatality gap, including the differences in mean age — 26 years in India to Brazil’s 33.5.

Experts have long criticized India’s broader death statistics, particularly in its rural hinterlands. Before the pandemic about one in five fatalities were not reported at all, according to Mukherjee. But that doesn’t explain why Brazil’s death rate is higher than aging Western nations that have also been hard hit by the pandemic.

“Brazil’s mortality rate is even more shocking because the population is much younger than other countries, such as European ones,” said Alberto Chebabo, the vice-president of the Brazilian Society of Infectious Diseases.

The rising infection and death rates come as the pace of the inoculation drives in each country has sped up in the past month after an initially sluggish start. India has managed to administer more than 117 million vaccine doses, compared to Brazil’s almost 33 million — though the latter has injected a higher proportion of its population. 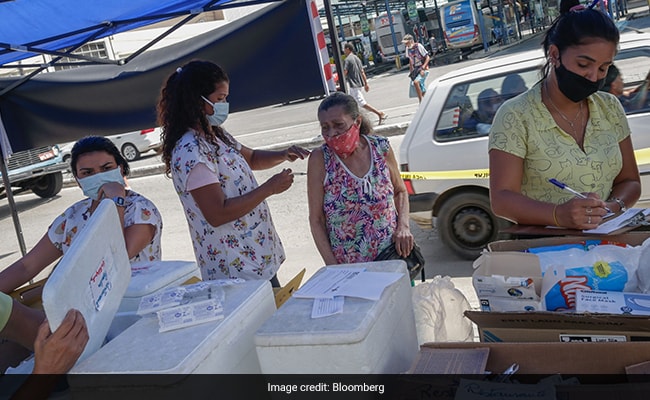 A healthcare worker administers a dose of the Sinovac Biotech Ltd.’s CoronaVac Covid-19 vaccine at a clinic in Rio de Janeiro, Brazil, on Wednesday, March 31, 2021.

Other theories behind the divergence between Brazil and India center around the two countries’ differing environments and experience of disease.

Some scientists say widespread exposure to an array of diseases in India may have helped its citizens build natural resilience against coronaviruses such as Covid-19.

Shekhar Mande, the head of India’s Council of Scientific and Industrial Research, is among those who have examined this trend and co-authored a published study on this. His research found correlations where citizens from low-hygiene nations tended to better cope with Covid-19.

“Our hypothesis, and this is strictly a hypothesis, is that because our populations are continuously exposed to many kinds of pathogens, including viruses, our immune system does not hyper-react to any new variation that comes in,” Mr Mande said in an interview.

Many experts acknowledge genetics or cross-immunity could be at play as other South Asian countries including Bangladesh and Pakistan have also seen far fewer deaths than Brazil.

That 87% of Brazilians live in urban areas, but two-thirds of Indians live in rural places with more space and ventilation could be another reason, according to University of Michigan’s Mukherjee.

Then there’s the fact that Brazil is where one of the most potentially deadly coronavirus mutations, the P.1 variant, was identified in December. Along with variants first seen in South Africa and the U.K., studies suggest these strains are more contagious.

“The P.1 variant has spread through a lot of Brazil’s cities and states simultaneously, leading to a collapse of the health system, which has lead to a very high mortality rate,” said Chebabo from the Brazilian Society of Infectious Diseases. Brazil is in a “perfect storm,” he added, with its lack of political leadership in implementing effective measures like lockdowns, compounding the Covid crisis. 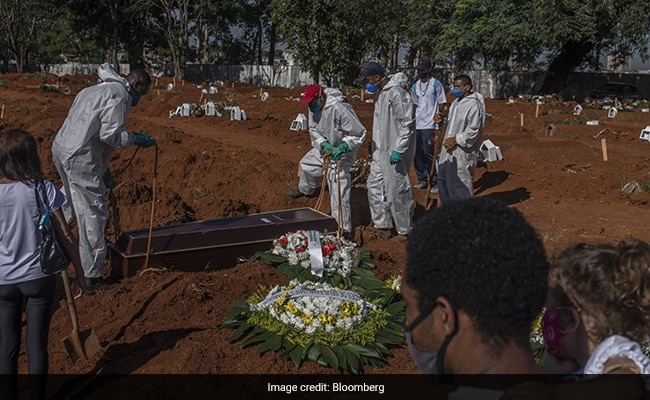 Mourners watch as workers wearing protective equipment bury the casket of a Covid-19 victim at the Vila Formosa cemetery in Sao Paulo, Brazil, on Wednesday, March 24, 2021.

The rapid and sustained spread of the variant in Brazil also gave its health-care system no breathing room, unlike a lull between waves over the last months of 2020 in India, which helped hospitals and frontline workers recover and plan ahead.

“We’re far better prepared for handling this wave than we were earlier in many, many ways,” Suneeta Reddy, managing director of Apollo Hospitals Enterprises Ltd., said in an interview. “We’ve learned the clinical protocols to treat Covid. We’re able to use our assets and beds in a much more rigorous manner.”

India could now be facing the prospect of a mutant strain-driven surge that’s worse than its first outbreak, though it’s hard to tell given the Asian nation had done genome sequencing for less than 1% of its Covid-positive samples.

India is studying the new virus variant but it wasn’t immediately clear if it was triggering the current wave of Covid-19 infections, Aparna Mukherjee, a scientist at the Indian Council for Medical Research told Bloomberg TV.

Mismanagement and Covid fatigue have also been blamed for the rampant spread and soaring death rates in both countries. Brazilian President Jair Bolsonaro has long-opposed lockdowns, clashing with local governments over pandemic mitigation measures and ridiculing mask wearing.

For India, a months-long decline in daily infections from the first peak in September — along with officials lifting restrictions on public gatherings — encouraged people to lower their guard. Many also became indifferent to the dangers of Covid after seeing friends and family with mild symptoms recover and politicians disregard safety protocols. Healthcare workers treat patients inside a Covid-19 intensive care unit (ICU) at a field hospital in the Heliopolis favela of Sao Paulo, Brazil, on Friday, March 19, 2021.

“Brazil is a complete disaster in terms of the political leadership, and India has become complacent after the initial decline in cases,” said Madhukar Pai, the Canada research chair in epidemiology and global health at McGill University in Montreal.

It’s too early to say if India can continue to avoid the more lethal fate of Brazil. While some parts of the country have imposed targeted lockdowns, elections are being held in five states — seeing thousands of voters pack campaign rallies — along with a month long Hindu pilgrimage that brings throngs to the banks of Ganges river.

These threaten to undo the benefits that can come from the ramped up vaccination drive. Daily deaths in the South Asian country have already more than doubled to over 1,000 a day in the past week, with crematoriums in many areas running non-stop and bodies piling up.

“Both countries need to greatly increase their vaccination coverage and work harder to implement other public health measures,” said Pai. “What matters is each country needs to work much harder to contain the epidemic.”

–With assistance from Muneeza Naqvi.