Karnataka is among the 10 worst hit in the current wave of the pandemic according to the Union Health Ministry which account for over 70 per cent of the cases. 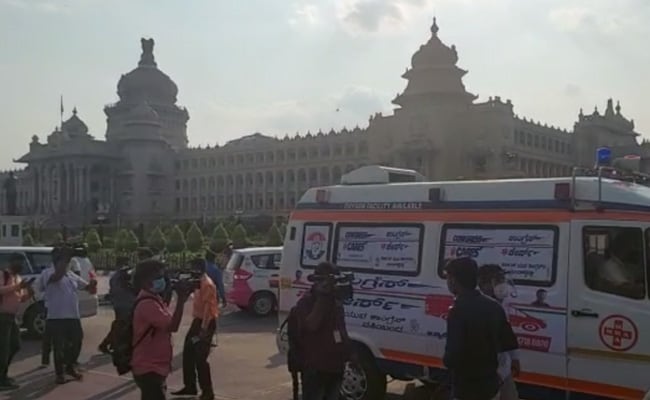 The patient’s family launched a protest outside the Karnataka Vidhan Soudha in Bengaluru.

A coronavirus patient’s family in Bengaluru had to sit on a protest outside the Karnataka assembly before they managed to get a hospital bed in yet another sign of the crisis unfolding in several parts of the country overwhelmed by the surge in COVID-19 infections.

Not able to find treatment in any hospital, the ambulance carrying the patient, a woman, and her daughter was taken to the Vidhan Soudha building in search of a bed.

Stopped by the police, her relatives launched a protest in front of the building. Later, Youth Congress leader Nalapad also reached the spot and joined their protest.

After around half an hour, Chief Secretary Ravi Kumar arranged a bed for the patient at the government’s Victoria Hospital.

While the patient was shifted to the hospital, the Youth Congress leader was taken into custody by the police.

Karnataka has been battling a massive spike in infections over the past few weeks and on Wednesday reported more than 50,000 new coronavirus cases for the first time, with nearly half of them in capital Bengaluru, as patients and hospitals were left scrabbling for medicines and oxygen.

The state is among the 10 worst hit in the current wave of the pandemic according to the Union Health Ministry which account for over 70 per cent of the cases.

India saw record new jumps in COVID-19 cases and deaths on Thursday, dashing tentative hopes that a catastrophic recent surge that has stretched hospitals to the limit might be easing.

Many experts suspect that with low levels of testing and poor record-keeping for cause of death — and crematoriums overwhelmed in many places — the real numbers could be much higher.

Until now the worst-hit areas have been Delhi and Maharashtra but other states including West Bengal, Kerala and Karnataka are now reporting sharp rises.

Sameera Reddy Tests Positive After Her Kids Contracted COVID-19: “This Is...