“The giraffe decided to come over for a sniff and a gentle investigation,” Timmy Moser said. 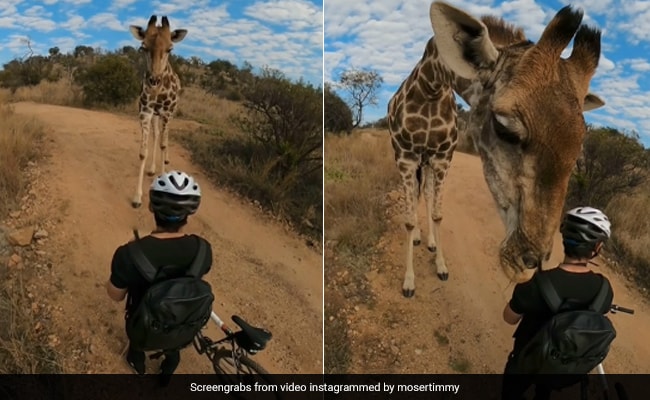 Timmy Moser’s encounter with an inquisitive giraffe has gone viral.


A video that has gone massively viral on social media shows an inquisitive giraffe stopping a mountain biker for a sniff. Timmy Moser was mountain biking with his girlfriend at the Lion and Safari Park – a wildlife conservation enclosure located near Johannesburg in South Africa – when they came across a herd of seven giraffes.

“Two hours into the ride my girlfriend and I encountered a herd of seven giraffes,” Mr Moser told NDTV. “One was in the path and we stopped for nearly an hour watching her,” he said.

At the instruction of park staff, Mr Moser and his girlfriend decided to try walking around the giraffe. However, the animal had other plans.

“She decided to come over for a sniff and a gentle investigation,” Mr Moser told NDTV. While sharing the video on Instagram, the photographer added that he was in “shock” at the size of the giraffe’s knees and kept trying to back away “but he kept sniffing.”

Footage filmed on Mr Moser’s GoPro Max 360 shows the giraffe approaching him and bending down to sniff him gently.

Mr Moser’s encounter with the giraffe has gone viral on social media platforms like TikTok and Instagram. On Instagram, it racked up more than 10 million views after it was shared by Earthpix, a popular travel and wildlife page.

Park staff identified the giraffe as Purdy, who often comes out to greet park visitors.

Giraffes are the tallest living terrestrial animals, found only in Africa. Last year, an amusing video showing how they eat grass had gone viral.