While U.S. health officials say delta is on its way to becoming the country’s dominant strain, an analysis by genomic testing firm Helix suggests it’s already there, accounting for about 40% of new infections. 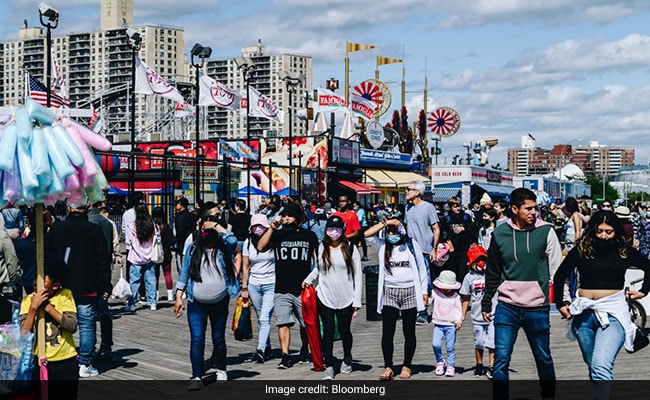 Already, the variant has disrupted some nations’ plans for a return to normal life.


The fast-spreading delta variant is clouding Americans’ hopes for a carefree summer — and casting a shadow of doubt over plans to get back to business as usual in the fall.

The shift in sentiment marks a reversal from the spring, when it looked like the U.S. immunization campaign would turn the tide definitively against the coronavirus. But lingering vaccine hesitancy in some areas has converged with the arrival of the more contagious delta strain and darkened the mood across much of the country.

“The delta variant recreates this anxiety that many of us had prior to being vaccinated,” said Megan Ranney, an associate professor of health services, policy and practice at Brown University. “‘Are we safe? Are our kids safe? Is it OK for me to go to a restaurant?’ The things that we had started to accept were normal again.”

While U.S. health officials say delta is on its way to becoming the country’s dominant strain, an analysis by genomic testing firm Helix suggests it’s already there, accounting for about 40% of new infections. As hospitalizations rise in some states, the Biden administration is sending response teams to less-vaccinated areas to try to combat its spread. 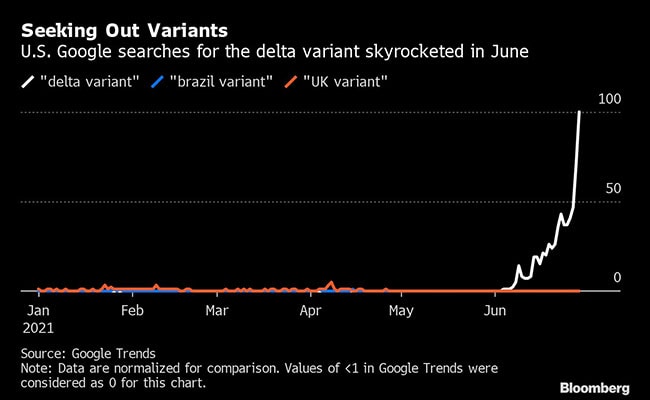 First seen in India, the mutant is estimated to be 55% more transmissible than the alpha variant that surfaced in the U.K. While the severity of disease the newer strain causes isn’t fully clear, some data suggests it leads to a higher risk of hospitalization than alpha.

Vaccines from Moderna Inc., Pfizer Inc., Johnson & Johnson and AstraZeneca Plc give protection against delta, research shows. Yet for millions of unvaccinated Americans, largely concentrated in the south and central regions of the country, the variant presents a serious threat, Ranney said.

Many unvaccinated people live in low-income areas and are at greater risk of developing severe disease due to underlying conditions, she said, so delta’s spread could lead to even greater disparities in health outcomes.

There’s also the looming potential that if the virus continues to spread and evolve, it could to take on a form capable of evading vaccines. A related strain called delta-plus has already emerged, but researchers have said there’s no evidence yet to suggest it adds to the danger.

“Weapons we have work against this virus,” said Mark Pandori, director of the Nevada State Public Health Laboratory. But “we could let this virus stay in the community, and it will become something that our weapons don’t work on. And that’s what we should be afraid of.”

Already, the variant has disrupted some nations’ plans for a return to normal life. Prime Minister Boris Johnson pushed back the lifting of many U.K. restrictions by a month to mid-July and is now saying some precautions will remain even longer. Regions of Australia have responded to its spread with lockdowns.

In the U.S., where just about half the population is fully vaccinated, delta has gotten Americans’ attention: 84% have heard of it, and 72% are at least somewhat concerned, according to an Axios-Ipsos poll this week.

Yet few people are taking more precautions, according to the poll. And guidelines from health officials are mixed: Los Angeles County recommended wearing masks in indoor public spaces, regardless of vaccination status, but the Centers for Disease Control and Prevention still says fully vaccinated people can shed masks in most settings.

“There’s a degree of flexibility,” Anthony Fauci, President Joe Biden’s medical adviser on Covid, said in a press briefing Thursday. “People at the local level, depending upon the on-ground situation, will make recommendations or not according to the local situation.”

In areas where the strain is feeding cases, there are some signs of increased caution. In Arkansas, one of the least-vaccinated states, daily vaccinations now appear to be trending up, according state epidemiologist Jennifer Dillaha. On a good day, the state might see 5,000 shots administered; on Tuesday, it was more than 10,000, she said.

“People are beginning to anticipate the rest of the summer with more apprehension,” Dillaha said.

Some Arkansans are being more careful about going out in public, and even some who are fully vaccinated are still masking, she said. State officials are already looking to the fall, asking about how the variant could affect schools when they come back into session.

In Missouri, where delta has also fueled cases, the St. Joseph School District moved summer programs at two schools online after students had to quarantine due to Covid exposure, Superintendent Doug Van Zyl said. Now, as those programs have ended, the school district is looking at its plans for the fall, he said.

Continuing to use vaccines and masks will be key to allowing workers to return to offices, said David Holtgrave, dean of the School of Public Health at the University at Albany.

“The more we use those tools now, with urgency and on a large scale, the more we’ll be able to think about returning to office and school this fall in a way that looks like a return to normal,” he said. “The less we do that now, the more disruption there will be.”

But the most pressing question may be how well vaccines will continue to hold up. As delta has spread in Colorado, health officials there began seeing higher attack rates and potential increases in cases among vaccinated people in long-term care facilities, said Ginger Stringer, epidemiology response program manager at the Colorado Department of Public Health and Environment. The department asked for help from the CDC to understand what delta’s implications were for vaccine effectiveness in general, and for older people and those with chronic diseases.

Health officials would like to know how likely it is that a fully vaccinated person who contracts delta will transmit it, said Dillaha, the Arkansas epidemiologist. The uncertainty around that question is part of why Los Angeles County recommended masking for all residents, Barbara Ferrer, director of the county’s department of public health, said at a press briefing.

Those gaps in knowledge add to the difficulty of making public-health decisions for a population fatigued by pandemic limits. Policymakers are facing “a horrible dilemma,” said Jonathan Javitt, a senior fellow at the Potomac Institute for Policy Studies.

“People have finally gotten out. They’ve finally tasted a bit of freedom,” said Javitt, who’s also chief executive officer of NRX Pharmaceuticals Inc., which is developing a therapy for severe Covid patients. After experiencing months of restrictions, “there’s only so much the average person is willing to take.”

–With assistance from Tim Loh and Kristen V. Brown.