Recent polling by Data For Progress shows 54 percent of likely voters nationwide believe Washington DC should be a state, a record level of support. 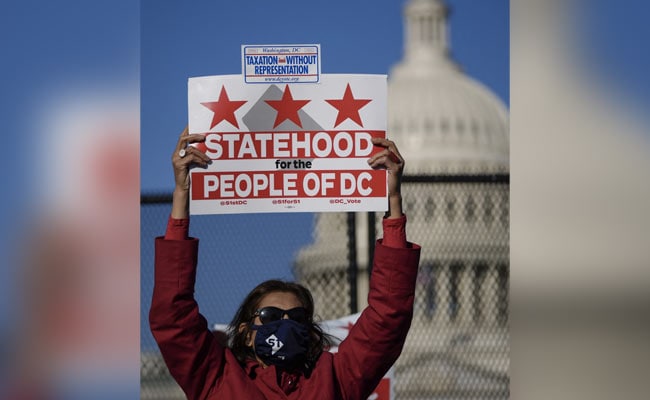 Congressional Democrats and Washington’s mayor made their case Monday for statehood for the US capital, proclaiming the disenfranchisement of DC residents one of the last glaring violations of American civil rights.

More than 712,000 people live in the District of Columbia, a Democratic stronghold with a population greater than two states, Wyoming and Vermont, and comparable to two others.

Its residents fight and die in US wars and face a higher federal tax burden than people in the 50 states. But while Washingtonians can cast ballots in US presidential elections, they are denied votes in Congress.

“Every American deserves a voice in their own government,” said congresswoman Carolyn Maloney, chair of the House Oversight and Reform Committee, as she opened a hearing on a bill that would make Washington DC the 51st state.

“Taxation without representation was the battle cry of our revolution, and it is still a battle cry.”

It will be an uphill road for statehood.

The bill is expected to pass the House, but it is unlikely to win approval in the evenly divided Senate, where Republicans would likely block the measure.

But Democrats are using their control of Congress to build momentum.

Recent polling by Data For Progress shows 54 percent of likely voters nationwide believe Washington DC should be a state, a record level of support.

Today, with Democrats controlling the House of Representatives, the Senate and the White House, “we have never been closer to statehood,” Eleanor Holmes Norton, who represents the district in the House as a non-voting delegate, told the hearing.

Washington Mayor Muriel Bowser who, like Norton, is Black, homed in on the debate’s racial component, noting at the hearing that early moves to right the injustice of no congressional representation were “replaced by racist efforts to subvert a growing and thriving Black city.”

“The disenfranchisement of Washingtonians is one of the remaining glaring civil rights and voting rights issues of our time,” Bowser said.

Placard-waving supporters of DC statehood gathered on several street corners Monday. Near the US Capitol dozens chanted “No more wait for a DC state!” and “51 in ’21!”

City authorities also posted American flags near the White House that bore 51 stars instead of the official 50, adding an extra star for Washington.

Last June in a historic vote, the House passed the symbolically-titled bill HR 51, which would create the state of Washington, Douglass Commonwealth, named for 19th century abolitionist Frederick Douglass.

The measure died in the Republican-controlled Senate.

But with the Senate now in the hands of Democrats and President Joe Biden in the White House, the party has revived the bill.

The DC statehood measure would give the capital two US senators and a voting representative in the House.

With Washington leaning heavily Democratic, the party would likely pick up all three congressional seats.

Democrats frame the bill as an overdue remedy to disenfranchisement perpetuated since Congress made Washington the nation’s permanent capital in 1790, and a longstanding civil rights issue for a city that’s nearly 50 percent black.

Republicans who oppose the effort say it runs counter to the intent of the US Constitution’s framers who sought to create a unique federal district not influenced by any state.

“DC statehood would mean a money grab from neighboring states, and a power grab by the United States Senate, all done in an impractical and unconstitutional fashion,” House Republican Jody Hice told the hearing.

Republicans say any DC statehood initiative must be done through a constitutional amendment.