The Chicxulub meteor, which slammed into what is now Mexico’s Yucatan peninsula around 66 million years ago, is thought to have led to the Cretaceous-Paleogene extinction event that killed off three quarters of life on Earth — dinosaurs included. 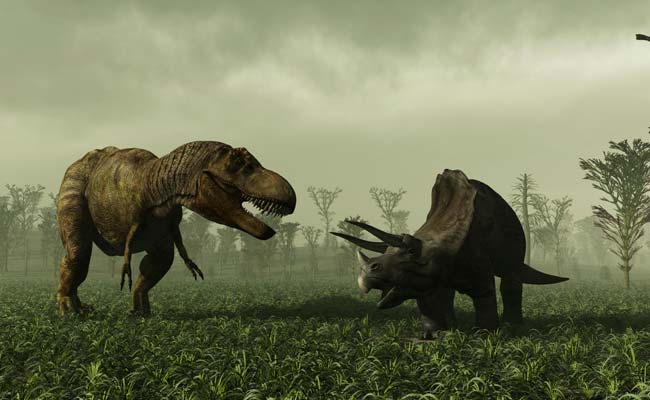 The study found that species decline began around 76 million years ago. (Representational)

Dinosaurs may have been in decline millions of years before the meteor strike often attributed to their extinction, according to research published Tuesday examining the role played by changing climate.

The Chicxulub meteor, which slammed into what is now Mexico’s Yucatan peninsula around 66 million years ago, is thought to have led to the Cretaceous-Paleogene extinction event that killed off three quarters of life on Earth — dinosaurs included.

Now new research suggests that a number of species of the terrible lizards may have been declining up to 10 million years before the meteor strike.

Research published in the journal Nature examined data from 1600 dinosaur remains found across the planet to model how common certain species of carnivorous and herbivorous dinosaurs were in the late Cretaceous.

The team found that species decline began around 76 million years ago.

Fabien Condamine, from the University of Montpellier’s Institute of Evolutionary Science and lead study author, said his team had followed the decline of six families of dinosaur, comprising nearly 250 distinct species.

“We have a peak in diversity around 76 million years ago,” he told AFP.

“Then there’s a decline that lasts 10 million years — that’s more than the entire duration of the Homo genus.”

The team found two possible explanations for the falling dinosaur diversity identified in the fossil records and their own computer modelling.

For one, the pace of the species decline corresponded with a strong cooling of the global climate around 75 million years ago, when temperatures fell up to eight degrees Celsius.

Condamine said that dinosaurs were adapted to a mesothermal climate — predominantly warm and damp — that had prevailed for tens of millions of years throughout their time on Earth.

“With strong cooling, like other large animals, they likely weren’t able to adapt,” he said.

The second possible decline explanation came as something of shock to the team.

Whereas both herbivores and carnivores would have been expected to be impacted at roughly the same time, the team found a two-million year lag between their respective declines.

“So the decline of the herbivores, which were the prey, would therefore have cascaded into a decline in meat-eaters,” said Condamine.

The study concluded that not only did a cooling climate and reduced diversity among herbivores lead to the dinosaurs’ slow decline, it also left the various species unable to recover after the meteor strike.

“These factors impeded their recovery from the final catastrophic event,” it said.

US Ramps Up Kabul Evacuation Efforts As August 31 Deadline Nears