Quivering with rage, the Chief Minister screamed at the top of his voice, “the entire public saw what goondaism took place yesterday. They will give you a befitting reply”. 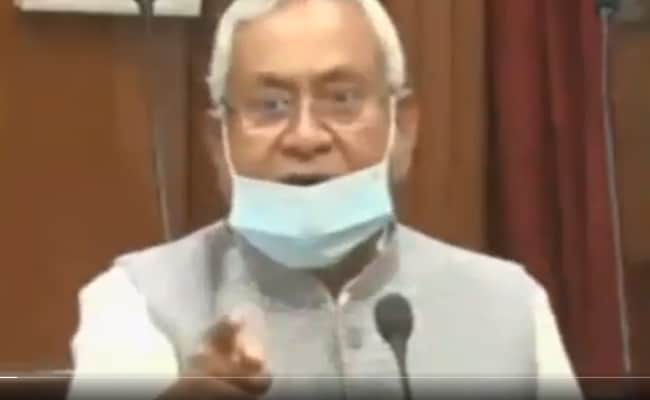 Nitish Kumar made the remark inside the legislative council. (file)

Enraged over the day-long rumpus created by the opposition on the previous day, Bihar Chief Minister Nitish Kumar on Wednesday warned the Grand Alliance against provoking the ruling NDA which was numerically stronger.

Mr Kumar made the remark inside the legislative council where he rose to intervene when MLCs of the opposition coalition led by RJD tried to create a ruckus over the previous days happenings inside the assembly.

The Bihar Special Armed Police Bill, 2021, which had led to the day-long drama on Tuesday, was presented and being debated inside the Upper House a day later when Grand Alliance members made noises about the “high handed” manner in which MLAs were thrown out of the assembly a day earlier.

Quivering with rage, the 70-year-old Chief Minister screamed at the top of his voice, “the entire public saw what goondaism took place yesterday. They will give you a befitting reply”.

Waving an angry finger at Congress MLCs, Mr Kumar said they seemed to have lost their sense of propriety following their long association with Lalu Prasads party which has often been accused of rowdyism.

He also said “do not forget that we are greater in number than you are. Yesterday, people of this side sat quietly, maintaining decorum, while you were engaging in mischief. Be mindful of the consequences”.

In the 243-member assembly, the ruling NDA has 126 MLAs besides it enjoys support of an Independent.

The opposition has 110 legislators while AIMIM has 5 and one MLA is from LJP. In the 75-member legislative council, the ruling coalition has overwhelming numbers.

Later, talking to reporters, Mr Kumar expressed displeasure over the opposition accusing him directly of having called the police, on Tuesday, inside to help marshals physically evict the most unruly of the opposition MLAs.

“It is the Speakers prerogative to requisition whatever resources he deems necessary to maintain order inside the premises.

“Whatever happened yesterday was unusual but has there been any other instance, in any state legislature, of the Speaker having been held hostage”, Mr Kumar asked.

He also deplored the opposition indulging in acts like tearing up documents and throwing shreds of paper towards the Chair besides clambering atop the speakers dais to physically prevent him from running the House.

Asked about the intention expressed by speaker Vijay Kumar Sinha that action might be taken against those MLAs whose behaviour was found most objectionable, the Chief Minister replied “the government has nothing to do with that.

“If the speaker deems it fit, he will take action in accordance with rules. We will neither egg him on nor try torestrain him”.