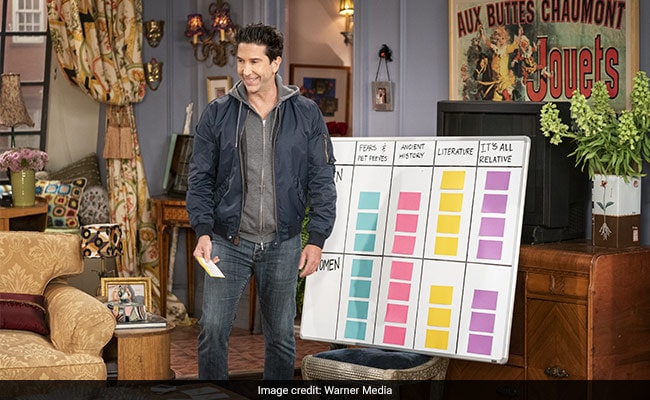 F.R.I.E.N.D.S – The Reunion: A still from the episode. (Courtesy: Warner Media)

It happened, the one where they get back together. They came, they saw (the old sets) and they conquered yet again and could we BE any more grateful to the powers that made it happen? F.R.I.E.N.D.S: The Reunion is now streaming, a heady mix of nostalgia, humour and emotion and the actual F.R.I.E.N.D.Sthemselves are just the way we remember them except that this time, Rachel and Monica won the quiz. Jennifer Aniston, Courteney Cox, Lisa Kudrow, David Schwimmer, Matthew Perry and Matt LeBlanc reunited for a special one-off episode in which they revisited the recreated sets of the iconic sitcom, participated in table reads and chatted with James Corden. Couch? Check. Fountain? Check. F.R.I.E.N.D.S ran from 1994 to 2004, shaping pop culture in a myriad ways. So what did we learn from the Reunion that we didn’t already know?

All 6 F.R.I.E.N.D.S Have Met Just Once Before The Reunion – And We Think We Know When That Was

The Reunion episode starts tellingly with these words as text: “Since the finale, the 6 cast members have been in a room all together only once. Until today…” We already know that the F.R.I.E.N.D.S for reel are also friends for real –Jennifer Aniston and Courteney Cox are best friends, in fact. As Lisa Kudrow said in the Reunion, “ We stay in touch, maybe not every day but we have such a bond from doing this show and forged this relationship that any time you text or call someone, they are going to pick up, they’ll be there.”

So when was the one time all six were in the same room before this? Photo evidence suggests it was this catch-up, a picture of which Jennifer Aniston used to make her Instagram debut in 2019:

Jennifer Remembers What Lisa And Courteney Wore When They First Met

Rachel Green started out waitressing in Central Perk and eventually had a high-powered career in fashion. Hardly surprising then that her real-life alter ego Jennifer Aniston should have no problem recalling the outfits Lisa Kudrow and Courteney Cox wore when all six actors met for the first time ever at the very first table read for the show. Lisa, channelling the eccentric Phoebe Buffay, wore “a white lacy hippy-ish blouse and jeans and Courteney had on a pink baby-doll tee from Fred Segal with a white trim.” Just don’t ask Jennifer what David, Matthew and Matt wore.

Nobody Will Ever Know What Chandler Does For A Living

Tom Selleck, who played dishy doctor Richard, dropped by the Reunion to ask a quiz question – “What does Chandler do for a living?” The very question that did Monica and Rachel in the first time round in the quiz they lost and ended up having to give Joey and Chandler their apartment. This time, though, the question has added meaning, posed as it is by Richard, Monica’s ex, about Chandler, whom she ends up with. So what does Chandler do? No, he’s still not a ‘transpondster’ and no, that’s still not a word, Rachel. The answer, as revealed by Richard (and he should know) is: “Nobody knows really.”

Oh. My. God, Janice Doesn’t Sound Like Janice At All IRL

Actress Maggie Wheeler made a two-minute appearance in the Reunion proving once again that a couple of minutes is all it takes for the scene-stealing Janice, the ex-girlfriend who won’t go away. Janice is the overenthusiastic and overpowering girlfriend of a reluctant Chandler and then ex-girlfriend, made memorable by an annoying voice and annoying laugh destined for pop culture glory. Maggie Wheeler, who played her so unforgettably, explained how Janice’s laugh was “born in the moment” – it was because Chandler is hilarious. “Matthew Perry is so funny and the minute I set eyes on him and he opened his mouth and I thought ‘Oh God, I’m going to lose it, I’m going to crack up. This character needs a laugh because I’m not going to be able to get through a single scene with this guy,’” she said.

Some Parts Were Easy To Cast

Ross was written for David Schwimmer who “hangdog look” stuck with the showrunners from a previous audition – they really had to work on getting him to say yes though because, disillusioned with acting, he had given it up and moved back to his hometown of Chicago. Phoebe was easy to find – Lisa Kudrow was already playing a very Phoebe-like waitress named Ursula on the sitcom Mad About You. Ursula was retained as Phoebe’s evil twin, also played by Lisa. Matt LeBlanc had “about 11 dollars in his pocket” when he was cast and here’s the fun thing – the actor he auditioned with ended up playing Fake Joey in the episode titled The One With Unagi.

Monica’s role was filled by Courteney Cox, slated to be cast as Rachel – she convinced the showrunners that she was a Monica IRL.

Two Parts Were Hard To Cast

Rachel and Chandler were the hardest to cast, not least because once Jennifer Aniston and Matthew Perry were found, they turned out to be committed to other shows. Jennifer went to the produces of the show she had already shot six episodes of and begged him to release her so she could play Rachel on F.R.I.E.N.D.S. “That show’s not going to make you a star, this show’s going to make you a star,” he told her. Matthew Perry was playing a futuristic Chandler in a sci-fi show called LAX 2194. Luckily for him, a Warner Bros executive happened to be at a taping one day and decided that the show was going nowhere and that Matthew would be better off on F.R.I.E.N.D.S.

The One With The Monkey Problem

Nobody liked the monkey. Well, almost nobody – Jennifer Aniston like Marcel. Nobody else did though – “The monkey scared me,” said Courteney Cox. David Schwimmer was the most scarred – the monkey would be fed live grubs by it trainer in between takes as it perched on the actor’s shoulder. Also, scenes took multiple takes to get right because “the monkey didn’t do it right.”

The Actors Have Keepsakes From Set

“One thing’s missing,” Courteney Cox said as the F.R.I.E.N.D.S walked into Rachel and Monica’s kitchen set, “The original cookie jar is at Lisa Kudrow’s house.” Jennifer Aniston took a neon coffee mug home and Matt LeBlanc has the best keepsake of all – a foosball from the foosball table in Joey and Chandler’s apartment.

Despite three great takes in what David Beckham says is his favourite episode, a fourth take was shot for the scene in which Chandler and Joey head for the same chair – Joey gets there first by jumping across the coffee table into the chair in Rachel and Monica’s apartment. The fateful fourth time that Matt LeBlanc made the jump, he tripped over the table and threw his should out. Paramedics were called and Matt ended up with his arm in a sling which had to be written into the episode.

The Biggest Reveal: Ross And Rachel Could Have Been For Real

The Internet has been losing it over the mega-confession that Jennifer Aniston and David Schwimmer actually had romantic feelings for each other that they never acted on. “The first season I had a major crush on Jen. At some point we were both crushing hard on each other but it was like two ships passing because one of us was always in a relationship and we never crossed that boundary,” David said. “I remember saying one time to David it’s going to be such a bummer if the first time you and I actually kiss is going to be on national television. Sure enough, first time we kissed was in that coffee shop but we just channelled all our adoration and love for each other into Ross and Rachel,” Jennifer added. Wait, what? Pivot! Pivot!

Also, “How did everyone not know that we were crushing on each other?” Turns out, the other four F.R.I.E.N.D.S did know.

Have you watched F.R.I.E.N.D.S: The Reunion yet? Tell us in the comments.