In Tamil Nadu, actor-politician Kamal Haasan contested from the Coimbatore South constituency, while actress Khushbu Sundar, who joined the BJP in 2020, stood from the Thousand Lights Assembly seat in Chennai. 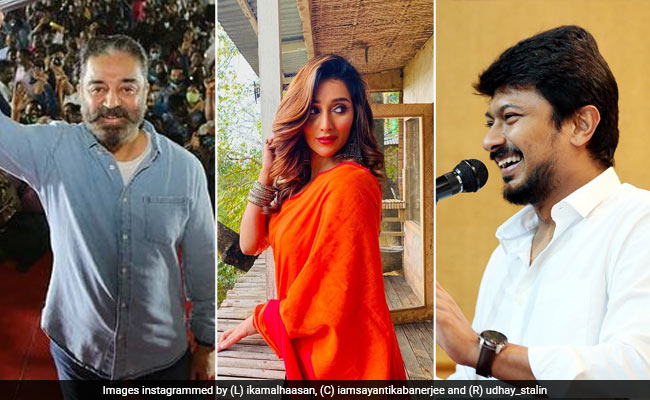 Assembly Election 2021: A look at the film stars who contested the polls.


Results of the recently-concluded Assembly Elections in West Bengal, Tamil Nadu, Kerala, Puducherry and Assam will be declared today. Counting of votes for the five states is underway for polls that held were between March 27 and April 29. Several film stars and celebrities contested the elections this time. In Tamil Nadu, actor-politician Kamal Haasan contested from the Coimbatore South constituency, while actress Khushbu Sundar, who joined the BJP in 2020, stood from the Thousand Lights Assembly seat in Chennai. Here is a look at the celebrities who are hoping to make a mark in the political sphere.

In Tamil Nadu, actor-politician Kamal Haasan and his party Makkal Needhi Maiam – which means “People’s Justice Centre” – hope to gain grounds after a rather forgettable debut in 2019 national elections. The 66-year-old actor is contesting the Tamil Nadu election from Coimbatore South constituency. He is currently ahead of INC’s Mayura S Jaykumar.

Udhayanidhi Stalin, the son of former Deputy Chief Minister of Tamil Nadu MK Stalin, is known for his work in the Kollywood film industry. The 43-year-old contested from Chennai’s Chepauk-Thiruvallikeni constituency, which is the bastion of his father’s Dravida Munnetra Kazhagam or DMK party. Before he joined politics, Udhayanidhi Stalin was a producer, distributor and actor who appeared as the lead in at least a dozen films. He is currently leading from the  Chepauk-Thiruvallikeni constituency.

The BJP-NDA fielded National award-winning actor Suresh Gopi from the Thrissur constituency in Kerala – the same seat from where he had unsuccessfully contested in the 2019 Lok Sabha elections. He is known for his work in the Malayalam film industry. Suresh Gopi is leading in Thrissur, early trends show.

In West Bengal, actor Sayantika Banerjee contested from the Bankura constituency. A popular name in Bengali cinema, Sayantika joined the Trinamool Congress after making a name for herself with films like Awara and Kelor Kirti.

Actor and model Yash Dasgupta was the BJP candidate from the Chanditala assembly seat in West Bengal. The 35-year-old started his career as a television actor before his debut in the 2016 film Gangster.