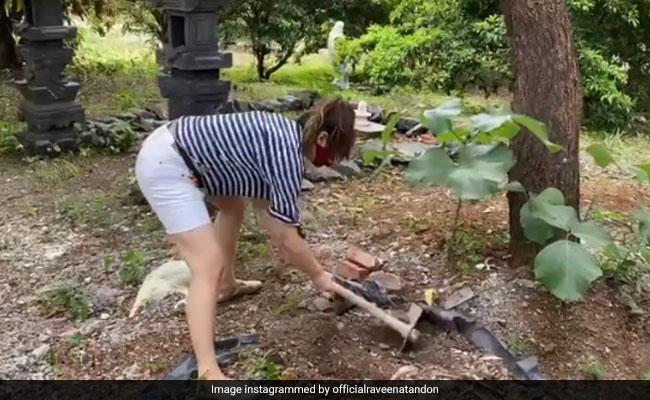 Raveena Tandon in a still from her video (courtesy officialraveenatandon )

Raveena Tandon’s love for nature often reflects in her social media posts and the latest is no exception. The actress is spending some quality time in her home village amidst the lockdown. She has been finding ways to connect with nature and is regularly updating us on social media. This weekend, she did a plastic drive around the neighbourhood. In the video shared on Monday, Raveena Tandon affirmed to her Instafam that she really did the digging herself. The caption read, “Haan bhai sach mien kiya (Yes, I really did it), a lot of you asked whether I really did dig it up? Earlier I just posted a small video, I did not want to pakao you all with my digging skills, which I was not aware was being shot.”

Just before sharing an awe-inspiring clip of her digging the ground, the actress uploaded another post from the same day. Wearing a striped tee and shorts, Raveena can be seen engrossed in the plastic removal activity. She captioned the post, “Trying to get rid of the remnants of plastic left behind on the farm by the workers, in my gaon ka ghar. Did a plastic pick up drive around the neighbourhood as well. A weekend well spent!”

In case you missed it, Raveena has been enjoying her make-up free days while making the most of her time in the lap of nature. One of the posts, she captioned as “take me to the greens” showed her clicking some happy pictures of herself.

Here are some memories from the archives of Raveena, the nature lover’s Instagram timeline:

Up next, Raveena will star in a web series directed by Vijay Gutte. Titled Legacy, the show will have her share the screen space with actor Akshaye Khanna. They co-starred in the 2003 film LOC: Kargil.