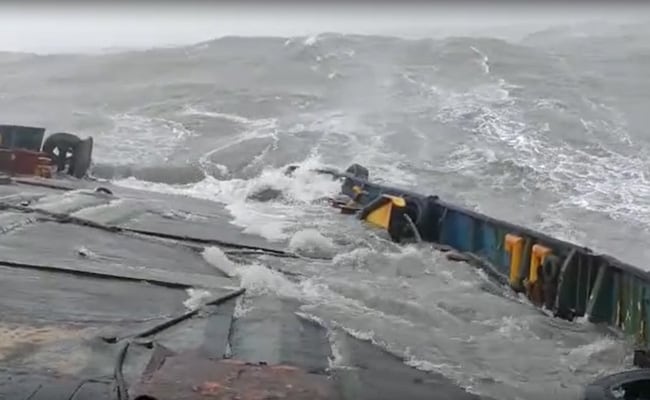 A week after Cyclone Tauktae swept past India’s west coast – with gale force winds battering ships at sea and destroying buildings on land – frightening new videos have emerged of a tugboat being tossed about on the Arabian Sea, with massive waves threatening to sweep the boat away at any minute.

The Varaprada was carrying 13 people when it sank off the coast of Maharashtra on the evening of May 17. Only two people survived – by jumping into the waters and fighting for their lives till they were rescued by the Navy.

The videos show a young man – identified as Suraj Chauhan, 22 – watching helplessly as one angry grey wave after another floods the deck, breaking off pieces from the Varaprada’s wooden frame.

The deck is littered with wooden planks, strands of rope and a couple of rubber tyres (used as ballast in calmer times). One particularly large wave causes the entire boat to tilt alarmingly to the right and a wall of water rises, seemingly intent on swallowing the boat whole.

The video shows the boat all alone, with only the churning Arabian Sea for company. 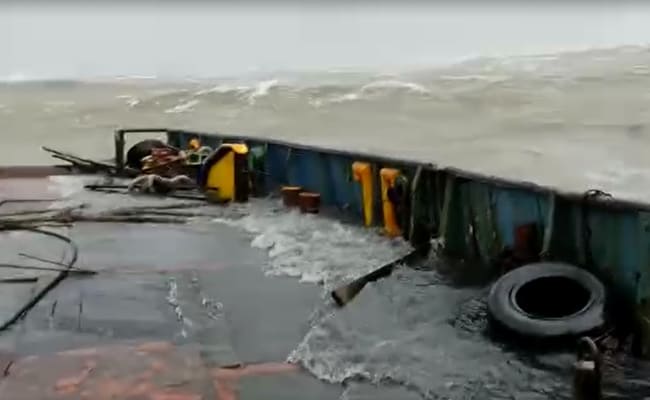 A second, and fiercer, wave thrashes the Varaprada, which is rocked violently by the impact, and another massive wave washes over the boat, which seems somehow to have become smaller before the sheer size of the waves attacking it.

Another video shows the Varaprada being thrown into the air as a massive wave slams into its left side, sending powerful sprays of wind and water across the foredeck and causing the boat to rock so hard that a huge wave from the right floods the entire front of the ship.

A third shows the Varaprada sinking, slowly but steadily.

This time the boat is nose-down in the Arabian Sea; the front of the ship – where the railings are broken – is flooded for a split second before the boat rocks back for a momentary reprieve. The man in the video was identified as 22-year-old Suraj Chauhan, one of 11 crew members who died

Suraj Chauhan – the man in the video – was not one of those who survived.

His father, Santlal Chauhan, told NDTV he was expecting his son home after the ship docked in Mumbai. He said he spoke to him the week before – about recharging his mobile phone plan.

Instead, a grieving father had to come to Mumbai to provide a DNA sample so his son’s body – ravaged by sea and wind, like the dozens of others recovered from watery depths – could be identified.

Another member of the missing crew is Captain Nagendra Kumar, whose wife told ANI she spoke to him on Sunday night – before the storm hit.

“He asked about everybody at home. As the network was not there, he cut the call. I called the company on Wednesday, they said it is missing and the search operation is on,” she said.

The remains of the Varaprada, which now lies in the murky depths of the Arabian Sea, were located Monday morning, the Navy confirmed, adding “No mortal remains of its crew were found in the tug.”

#CycloneTaukte#SAR#Update
Specialist Clearance Diving teams of Western Naval Command conducted diving operations on the wreck of Ill-fated tug Varaprada on 24 May with support from#INSMakar & #INSTarasa. No mortal remains of its crew were found in the tug.@indiannavyhttps://t.co/aejX8RHerkpic.twitter.com/4IxiL5frDH

The Varaprada was one of at least two boats sunk by Tauktae last week.

The other was a barge – P-305 – carrying 261 people. Two other barges – Gal Constructor and Support-Station 3 – were also caught at sea, but the 338 people on board those two have been safely rescued.

A total of 71 bodies have been recovered from the two crash sites – Varaprada and P-305 – so far, Mumbai Police was quoted by news agency ANI this afternoon.

Tauktae made landfall in Gujarat at around 8:30 pm on Monday last as an ‘extremely severe cyclonic storm’, packing 185 km per hour gusts. The storm left a trail of destruction in its wake – including several dead, thousands of damaged houses and roads, and broken electricity and phone lines.

The first cyclone in India this year, Tauktae also struck amid an ongoing battle against a deadly second wave of Covid, which has put tremendous pressure on the country’s hospitals.