The carcass of a shark that washed up on a South African beach has left social media aghast. The photos of the dead fish have been posted on Facebook. 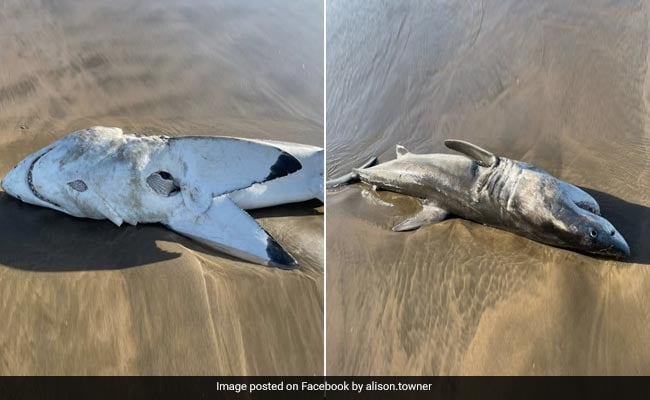 Since 2017, killer whales are thought to be responsible for several other great white shark deaths.

The carcass of a shark that washed up on a South African beach has left social media aghast. The photos of the dead fish have been posted by shark biologist Alison Towner on his Facebook page and show a large hole on the creature’s underbelly. Newsweek said in a report that the shark its liver was missing, which suggests that it was killed by orcas, also known as killer whales. The orcas are the only hunters that an apex predator like the Great White Shark is scared of. It may have descended from the Megalodon, but the Great White Shark is hunted down by orcas who usually attack in groups.

“The first Orca predated white shark carcass has washed out in Hartenbos, Mossel Bay today. Leading the research on these interactions, as part of my PhD and conducting the necropsies with expert colleagues on all of the shark carcasses here in South Africa, it never gets easier seeing this. This is a very fresh sub adult female shark,” Ms Towner wrote while sharing the post.

Ms Towner was also an author on a paper published in African Journal Of Marine Science that examined the deaths of great white sharks.

Since 2017, a single pair of killer whales is thought to be responsible for several other great white shark deaths off the coast of South Africa, said Newsweek. It is believed that they remove and consume their fatty internal organs, such as their livers and hearts, said the outlet.

The orcas actively search for foods which contain high amount of lipids in them, which is why these large and fatty organs appear to be their favourite food.

Between February and June of this year, five white sharks washed up on beaches in Gansbaai, South Africa, with four of them having their livers removed in an incredibly precise manner, according to Newsweek report.

Ms Towner told the outlet, “There were killer whale tooth impressions on the pectoral fins of the sharks and their livers were removed so neatly- it would take coordination of large and sophisticated animals to tear a white shark open and do this.”

“Also, each time a dead shark washed out, there had been sightings of killer whales in the area, so all the evidence pointed to killer whale predation, and was also confirmed by killer whale biologists,” she added.