Thursday, June 30, 2022
Rajpostexam.com Single Spot For Worldwide Information And News
Home Trending News Guess The Star Who Was Turned Away By Oblivious Server In This... 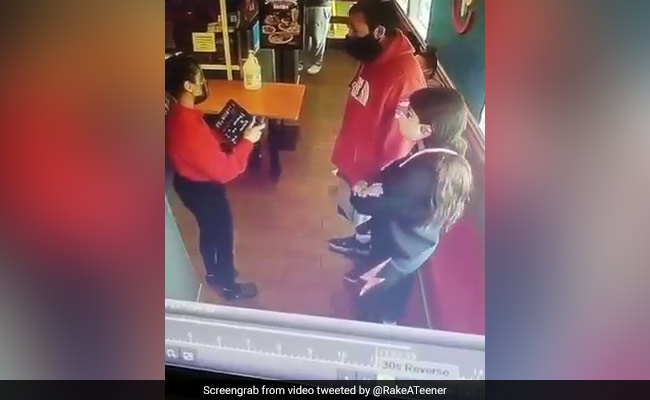 Adam Sandler was spotted leaving an IHOP outlet after being told there was a 30-minute wait.


Adam Sandler went viral on Wednesday after he was turned away from a restaurant by an oblivious server. The 54-year-old went unrecognised under a mask despite being an A-list celebrity, security footage posted on TikTok by the server, Dayanna Rodas, shows. According to the Daily Mail, Dayanna went viral after she posted the video on TikTok and revealed that she could not recognise the star under his mask.

The video starts with a shot of Dayanna in a clown makeup filter with the caption: “Not realising it’s Adam Sandler and telling him it’s a 30 minute wait and him of course leaving because he’s not going to wait 30 minutes for IHOP.”

The video then cuts to Adam Sandler – dressed in a red sweatshirt and black mask – entering the IHOP (International House Of Pancakes) outlet with one of his daughters, and being told by Dayanna that he would have to wait. He was seen leaving the restaurant after that.

“Pleaseee come back,” wrote Dayanna when she posted the video on TikTok this Monday, where it has gone viral.

I’m with Adam on this one. I wouldn’t wait 30 minutes for IHOP either. And, cusps for IHOP treating like everyone else. And mad respect for Adam not throwing “celebrity” to jump the line.

Adam Sandler has not yet commented publicly on the video, but a publicist for the actor confirmed to HuffPost that it was, indeed, him in the video.

Adam Sandler is best known for his work in comedies like 50 First Dates and Happy Gilmore. He will next be seen in the Netflix film Spaceman.