Hamas said the volley of 130 rockets, which killed a six-year-old boy in southern Israel and set off air raid warnings up to Tel Aviv, was a response to the destruction of Gaza City’s Al-Farouk tower. 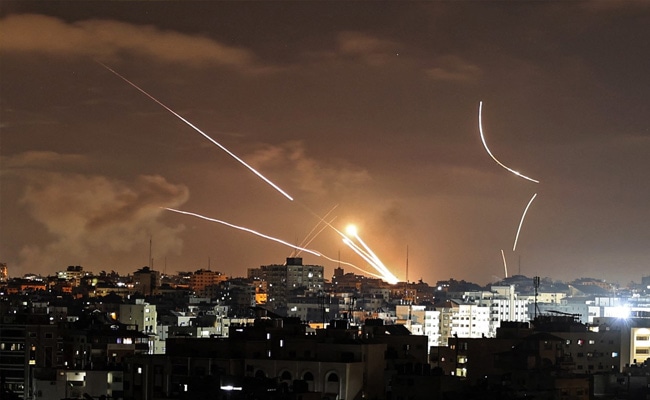 Hamas said the volley of 130 rockets was a response to the destruction of Gaza City’s Al-Farouk tower.

Hamas unleashed a fresh barrage of deadly rocket fire towards Israel Wednesday in retaliation for the levelling of a 14-story building in Gaza by Israel, which ruled out an imminent ceasefire.

Hamas said the volley of 130 rockets, which killed a six-year-old boy in southern Israel and set off air raid warnings up to Tel Aviv, was a response to the destruction of Gaza City’s Al-Farouk tower.

The tower, which spewed black smoke from bright embers following the strike, was described by Israel as housing the Hamas intelligence service.

“This is just the beginning,” warned Prime Minister Benjamin Netanyahu. “We’ll deliver them blows they haven’t dreamt of.”

Gaza militants have launched more than 1,000 rockets since Monday, said Israel’s army, which has carried out more than 350 air strikes on the crowded coastal enclave, targeting what it calls military sites.

The most intense hostilities in seven years have killed at least 56 people in Gaza, including 14 children, and seven in Israel, including a soldier and one Indian national, since Monday.

The six-year-old boy died after a rocket struck his home in Sderot, where four other people were being treated for injuries, the United Hatzalah volunteer rescue agency said.

The bloodshed was triggered by weekend unrest at Jerusalem’s Al-Aqsa mosque compound, which is sacred to both Muslims and Jews.

The UN Security Council held another emergency meeting without agreeing on a joint statement due to opposition from the United States, Israel’s ally.

Netanyahu spoke late Wednesday to US Secretary of State Anthony Blinken, who reiterated his call to “end the violence”.

Netanyahu declared a state of emergency in the mixed Jewish-Arab Israeli city of Lod, where police said “wide-scale riots erupted among some of the Arab residents”, and authorities later imposed an overnight curfew there.

There were fears of widening civil unrest as protesters waving Palestinian flags burnt cars and properties, including a synagogue, clashed with Israeli police and attacked Jewish motorists in several Jewish-Arab towns.

Israel’s President Reuven Rivlin, in unusually strong language, denounced what he described as a “pogrom” in which “an incited and bloodthirsty Arab mob” had injured people and attacked sacred Jewish spaces.

Hamas said several of its top commanders have been killed in Israeli strikes, including its military chief in Gaza City, Bassem Issa.

Its leader Ismail Haniyeh threatened to step up attacks, warning that “if Israel wants to escalate, we are ready for it”.

British Prime Minister Boris Johnson urged both sides to “step back from the brink”.

In Gaza City, people have sifted through debris after a previous Israeli air strike destroyed a 12-storey building that Hamas said had been a residential building. It was also known to house the offices of several Hamas officials.

Five members of a single family were killed by an Israeli strike in northern Gaza Tuesday, including young brothers Ibrahim and Marwan, who were filling sacks of straw at the time.

“We were laughing and having fun when suddenly they began to bomb us. Everything around us caught fire,” their cousin, also called Ibrahim, told AFP.

In Israel’s central city of Lod, a man and a girl were killed Wednesday by rocket fire from Gaza. Israel identified one of the dead as 16-year-old Nadin Awad, an Arab Israeli.

Her cousin, Ahmad Ismail, told public broadcaster Kan that he was near Nadin when she was killed alongside her father Khalil Awad, 52.

“I was at home, we heard the noise of the rocket,” said Ismail. “It happened so quickly. Even if we had wanted to run somewhere, we don’t have a safe room.”

An Israeli woman was killed when rockets hit Rishon Letzion near Tel Aviv. In Ashkelon, a town near Gaza which Hamas threatened to turn into “hell”, rockets fired by militants killed two women Tuesday.

The crisis flared last Friday when weeks of tensions boiled over and Israeli riot police clashed with crowds of Palestinians at Jerusalem’s Al-Aqsa mosque.

Nightly disturbances have since flared in east Jerusalem, leaving more than 900 Palestinians injured, according to the Palestinian Red Crescent.

The unrest has been driven by anger over the looming evictions of Palestinian families from the Jerusalem neighbourhood of Sheikh Jarrah.

Footprints Of Last Dinosaurs To Walk On UK Soil 110 Million...

Jill Biden To Attend US Spelling Bee; 9 Indian-Americans In Finals