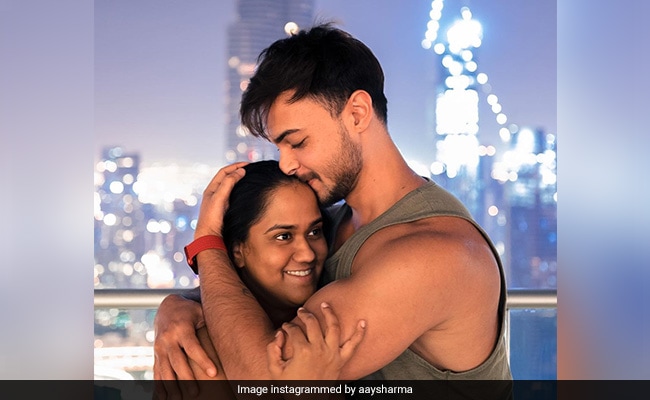 Arpita Khan Sharma and Aayush Sharma are couple goals and there’s proof of it on Instagram. Arpita and Aayush, who got married in 2014, often share adorable glimpses of just the two of them on social media. Aayush recently added one more to his collection of favourite photos. On Sunday, he posted a heart-warming photo, in which he and his wife Arpita can be seen sharing a loved-up moment. Aayush Sharma added a simple but a rather thoughtful caption to his post, which summed up the essence of the moment – he described Arpita as “My main” and added the red heart emoji.

Earlier, Aayush shared this black and white photo with Arpita and wrote: “Always looking out for me.”

Arpita, who is actor Salman Khan’s sister, and Aayush, are parents to two kids. The couple welcomed son Ahil in 2016 and daughter Ayat was born in 2019. Ayat shares her birthday with her uncle Salman Khan. Both Aayush and Arpita often fill up their Instagram with family photos: “2020 was a year that didn’t go as planned for all of us. But what it actually taught us is the importance of family,” Ayush wrote in his New Year’s post.

Aayush Sharma stepped into Bollywood with the 2018 film LoveYatri, co-starring Warina Hussain, which was produced by Salman Khan. He will next be seen in Antim: The Final Truth, which will mark his onscreen collaboration with Salman Khan. The film will be directed by Mahesh Manjrekar and it will be produced by Salman Khan Films. When Antim was announced last year, it was slated for a 2021 release.