Larry Page and Sergey Brin met at Stanford University where they studied for their PhD’s in computer science. The duo launched Google in 1998 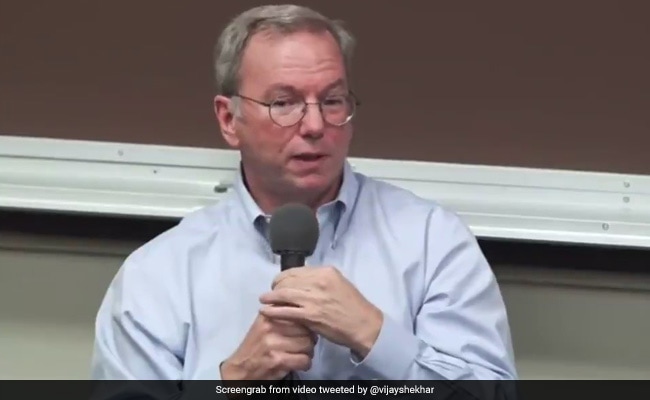 Eric Schmidt revealed the story behind Google Chrome’s invention in 2015.


Eric Emerson Schmidt, the former CEO of Google, in a 2015 lecture at Stanford University, revealed how Google’s web browser Chrome was invented. In a minute-long video posted on Twitter by Paytm founder Vijay Shekhar Sharma, Mr Schmidt said that Larry Page and Sergey Brin — the CEO and President of Google’s parent company, Alphabet — would play tricks on him, and one such trick led to the creation of Google Chrome.

In the video, Mr Schmidt said that Larry Page and Sergey Brin would often come to him and express the desire to build an operating system and a browser. Mr Schmidt, in turn, would tell them that they were not strong enough to take on Microsoft.

“And I said there was no scenario we were going to do an operating system and a browser because Microsoft would kill us and I don’t want to get killed,” Mr Schmidt explained.

The former Google CEO would acknowledge that Larry and Sergey as well as the entire team under them was full of smart people. “Yes, we have lots of revenue, but these guys can kill us,” Mr Schmidt feared.

“Shocking.” And then he asked how long they had been working on it. They said they had been doing it on the side. “No, you have done it full-time,” he said.

“How many more people do you have. Oh, we have 10 more people,” Mr Schmidt quoted them as saying.

He then asked if Larry Page and Sergey Brin knew about it. “Larry and Sergey encouraged it,” was the answer.

“I knew they were going around me,” Schmidt said.

So, that’s how Chrome, now the most dominant browser, surpassing Microsoft’s Internet Explorer and Mozilla’s Firefox in popularity, was invented

The small clip has been watched over 13,000 times and has been shared by more than 120 people.

Larry Page and Sergey Brin met at Stanford University where they studied for their PhD’s in computer science. The duo launched Google in 1998. Larry and Sergey invented Google’s PageRank algorithm together. In 2015 they created Alphabet, which includes Google, Nest, Calisco and other entities.

Another interesting trivia about the two is that they draw an annual salary of $1 from Alphabet. The source of their wealth is the value of their shares in the company they co-founded.