Coronavirus: As of May 11, Mumbai had almost half the number of active virus cases as capital New Delhi. 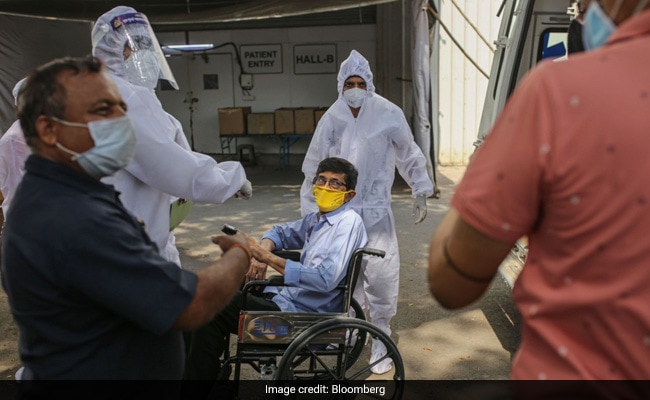 Coronavirus: Health workers assist patients outside a quarantine center in the Goregaon suburb.


At midnight on April 17, as a deadly new wave of the coronavirus overwhelmed India, Mumbai’s Municipal Commissioner Iqbal Singh Chahal learned that six hospitals in his city would run out of oxygen within hours — putting the lives of 168 patients at risk.

Amid the ensuing scramble, the patients were rushed to the temporary hospitals Iqbal Singh Chahal’s team had set up during the city’s first wave in 2020. He hadn’t dismantled the facilities even when cases dipped. Unlike most hospitals that relied on cylinders, they had been equipped with pipes that supplied oxygen directly to patients’ beds. All 168 survived.

That night — which Iqbal Singh Chahal describes as the scariest he’s ever had — offers a look at tactics Mumbai used to quell its outbreak faster, and with fewer casualties, than other parts of the country. Mumbai has reported 2,784 deaths since the second wave began on March 1, around a fourth of the 10,595 in New Delhi. Even Supreme Court has suggested that aspects of Mumbai’s model could be adopted in other parts of the nation like New Delhi.

By contrast, the record number of daily deaths India continues to report, along with the collapse of the health system in parts of the country, have highlighted broad shortfalls in governance and public planning nationally. 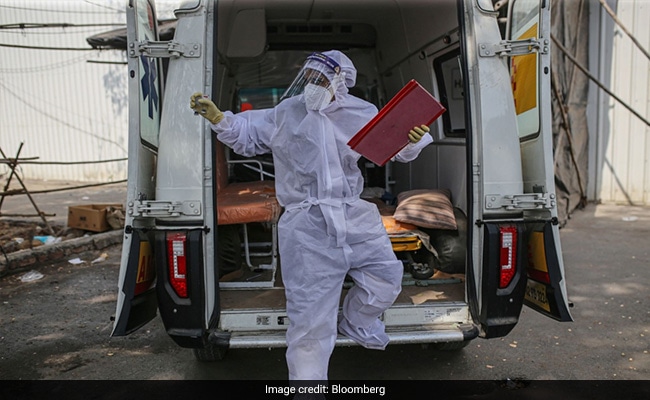 A health worker exits an ambulance outside a quarantine center in Mumbai.

Iqbal Singh Chahal attributes the city’s successes partly to a decentralized system his team set up during the first wave, which included neighborhood war rooms to manage cases by locality. He’s also made vast changes to the way the city sourced and used its medical oxygen, creating emergency stocks and tracking systems for tankers. So, even as families desperately pleaded for supplies on social media, Mumbai’s patients reported fewer problems.

With a population of 16 million spread across glistening skyscrapers, apartment complexes and sprawling slums, Mumbai is the world’s second-most densely packed city, according to data from the United Nations. About 32,000 people are crammed in per square kilometer. That makes lessons from Mumbai particularly valuable as fears grow about outbreaks in other crowded places from Bangkok to Kathmandu.

“I knew it was a long drawn war; and I knew only systems can win the wars — individuals can’t,” Chahal said in an interview via Zoom. “Devising systems and making them run on auto pilot is key to the Mumbai model.”

As of May 11, Mumbai had almost half the number of active virus cases as capital New Delhi. Delhi Health Minister Satyendar Jain and Principal Secretary of Health Ashish Chandra Verma didn’t reply to calls seeking comment.

Still, the risks to Mumbai are far from over. The city has recorded 688,696 cases since the pandemic began, adding 1,544 on May 16. Iqbal Singh Chahal is preparing for a third wave by setting up jumbo pediatric hospitals because public health experts have warned his team that more children might be infected in the next surge.

Managing the trajectory of the virus in Mumbai is crucial given the potential human toll of a runaway epidemic. And as India’s financial capital, the city is also central to the nation’s already battered economy. 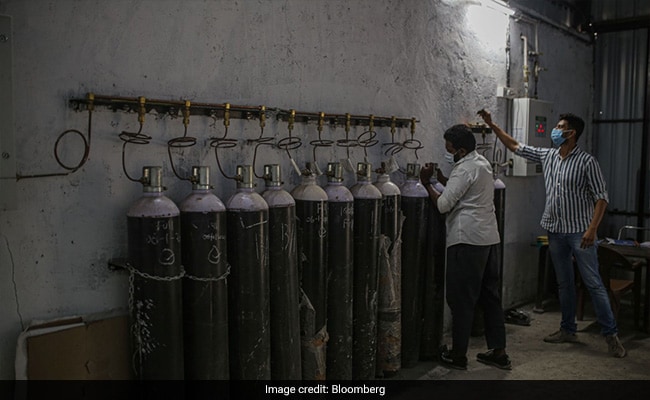 A medical oxygen plant and manifold unit in the Goregaon suburb of Mumbai.

Iqbal Singh Chahal, 55, says he built up administrative skills growing up in a military family: His father was an officer in the Indian army. Over the past decades, he’s held a string of bureaucratic positions, including working on a proposal to remodel Dharavi and helming an overhaul of Maharashtra state’s irrigation systems. 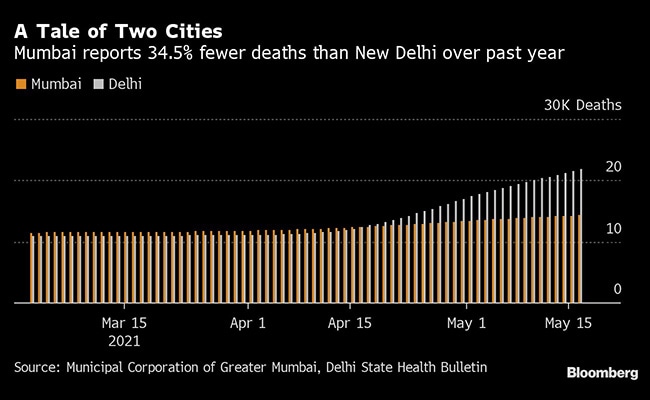 He had to hit the ground running last May, when Maharashtra’s Chief Minister Uddhav Thackeray asked him to head the municipal corporation at the height of Mumbai’s first wave. Bodies were piling up in mortuaries and the city’s densest slum, Dharavi, was battling a fast growing coronavirus crisis.

Lessons from last year taught him the importance of a local approach and getting patients quickly isolated, a model he calls “Chase the Virus.” His team went door to door in Dharavi looking for people with symptoms and eventually isolating 150,000 people from the slum, a move that stopped the chain of infection. At the time, Iqbal Singh  Chahal also abolished the central hub handling the city’s crisis and created local war rooms in each of the 24 administrative divisions — wards or neighborhoods — of the city.

That localized approach helped as affluent neighborhoods were worse hit during the second wave. The local war rooms got test reports and reduced the spread the of infection by pointing patients to the nearest available hospital beds. The city administration negotiated with private hospitals to allocate beds for Covid patients at government decided rates.

“We set up an excellent public private partnership between hospitals which is still today not visible in rest of the country,” Iqbal Singh Chahal said.

When oxygen was running out during the second wave, Iqbal Singh Chahal started to source oxygen from nearby states. Mumbai’s civic authorities also banned hospitals from adding beds beyond their oxygen storage capacity, dodging the shortages that rocked other cities.

“Wiser after our experience of last year, when the second wave hit with its dangerous mutations, the Brihanmumbai Municipal Corporation quickly scaled up its infrastructure including beds, equipments and doctors,” said Dr. Hetal Marfatia, professor and head of the ear, nose and throat department at Mumbai’s KEM Hospital. This time round most hospital beds had readily available oxygen lines, she said. 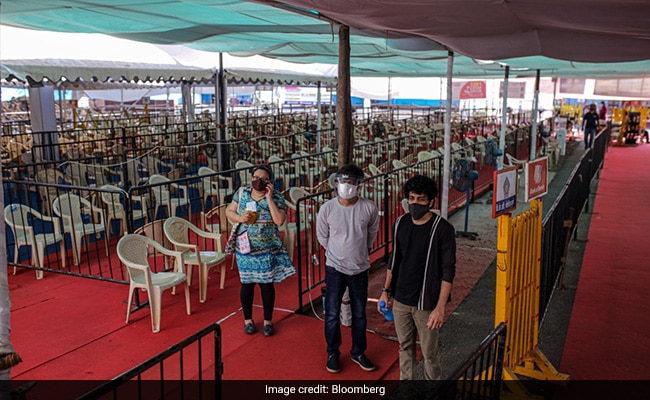 People in a waiting area at an empty Covid-19 vaccination center in the Bombay Kurla Complex.

At times, Iqbal Singh Chahal said he’s had to simply find innovative ways to use limited resources. When ambulances were in short supply, he called the city’s election commission and converted the 800 cars they sent over into ambulances by putting up partitions between the driver and passenger.

Still, Mumbai has been the epicenter of the virus twice, and local doctors warn of the continued risks. Iqbal Singh Chahal’s team has also drawn criticism for what some have described as a chaotic approach to vaccinations.

“Though our cases graph has come down now, I would say this is not the end,” said Dr. Vikas Oswal, a pulmonologist practicing in clinics in Dharavi and other parts of Mumbai. “We are expecting a rise in cases within two weeks now, as vaccination centers are over flooded. They are not being managed properly.”

“More we vaccinate, the greater are chances that we reduce the threat of the next wave,” Chahal said.