In Satyadeep Misra’s latest postcard from Mukteshwar, he can be seen hugging Mila – the furry member of the Gupta family 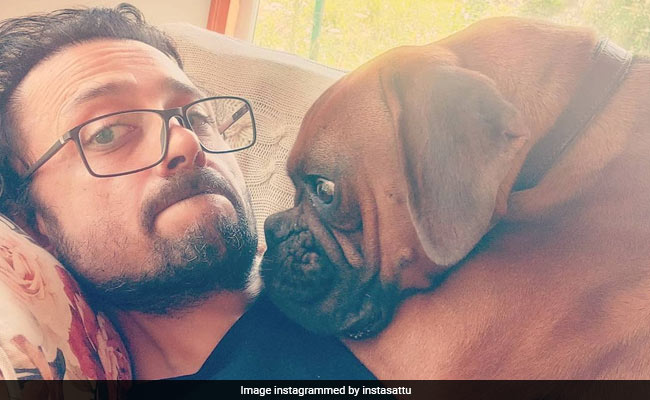 Actor Satyadeep Misra, who is dating designer Masaba Gupta, is currently in Mukteshwar with her family. Satyadeep often shares glimpses of his vacation life in the hills on his Instagram and on Monday, he added one more to the list. In Satyadeep Misra’s latest postcard from Mukteshwar, he can be seen hugging Mila – the furry member of the Gupta family. “Mila. Mukteshwar. Mush,” he captioned the adorable photo with Mila. In the comments section, Satyadeep’s friends Sayani Gupta and Maria Goretti couldn’t help but confess how cute the photo is. And meanwhile, we also spotted a comment from Satyadeep Misra’s former wife, actress Aditi Rao Hydari. “Uffoo,” she wrote along with a smiley.

Satyadeep Misra photo with Mila is indeed a case of cuteness overload. Here, take a look:

Aditi Rao Hydari got married to Satyadeep Misra in 2007 and they parted ways in 2013. The 34-year-old actress has been extremely guarded about her personal life, especially her failed marriage. When asked about her separation from Satyadeep, the actress told Hindustan Times in a 2017 interview: “I haven’t talked about it in the past and there’s a reason I don’t want to talk about it even now. Somehow, I don’t think that (discussing) personal stuff – in terms of which family I come from or where I grew up – all that is not important as actors. We have to be transparent and we need to take on whatever is given to us, and we need not talk about our private life in open.”

Meanwhile, Satyadeep Misra and Masaba Gupta’s romance came into the limelight during the nationwide lockdown last year. During the lockdown, they couple spent months together in Goa. They also featured together in the Netflix series Masaba Masaba, which also stars Masaba’s mom Neena Gupta and marked Masaba’s debut in acting. Masaba Gupta is best known as the owner of the fashion label House Of Masaba.