“The evolution of your soul… is your responsibility,” Sanjay Dutt’s wife Maanayata wrote in the caption 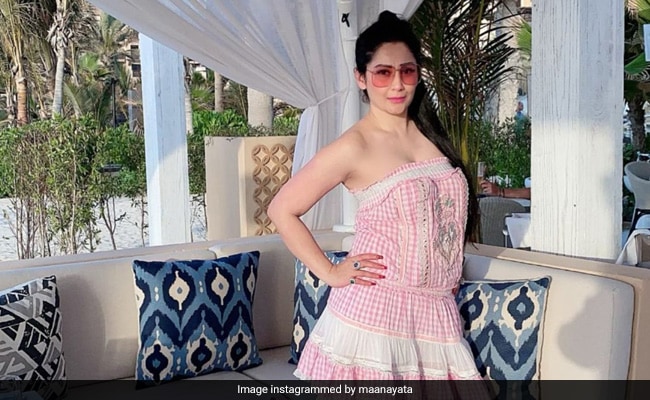 Sanjay Dutt’s wife Maanayata and his elder daughter Trishala Dutt often leave adorable comments on each other’s Instagram posts. The reason we brought this up is because, on Monday, Maanayata posted a stunning picture of herself on social media and got a shout-out from Trishala, who is Sanjay Dutt’s daughter with his former wife Richa Sharma. In her post, Maanayata can be seen wearing a baby pink off-shoulder dress and posing for the camera. “The evolution of your soul… is your responsibility! #mondaymotivation #love #grace #positivity #dutts #beautifullife #thankyougod,” she captioned her post. A few hours later, Trishala Dutt reviewed Maanayata’s look in just one word: “Pretty,” which she wrote in the comments section along with three read heart icons.

And here’s what Trishala Dutt commented: 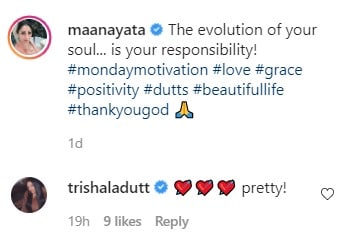 On Holi, Sanjay Dutt gave his fans a glimpse of his celebrations with his family. He posted a picture of himself, Maanayata and their kids Shahraan and Iqra dressed in white outfits with colours on their faces and attires. “Keep the celebrations at home this year for the safety of your loved ones,” wrote Sanjay Dutt in his post and added: “Wishing you all a very happy Holi.”

Sanjay Dutt was previously married to Richa Sharma, who died of brain tumour in 1996. Their daughter Trishala stays with her grandparents in the USA. The actor and Maanayata got married in 2008.

In terms of work, Sanjay Dutt was last seen in Sadak 2, which released last year on Disney+Hotstar. His upcoming films are KGF: Chapter 2, Torbaaz, Bhuj: The Pride Of India, Shamshera and Prithviraj.