Rakesh Tikait said he met West Bengal Chief Minister Mamata Banerjee in Kolkata on Wednesday and told her that the Opposition in the country is weak. 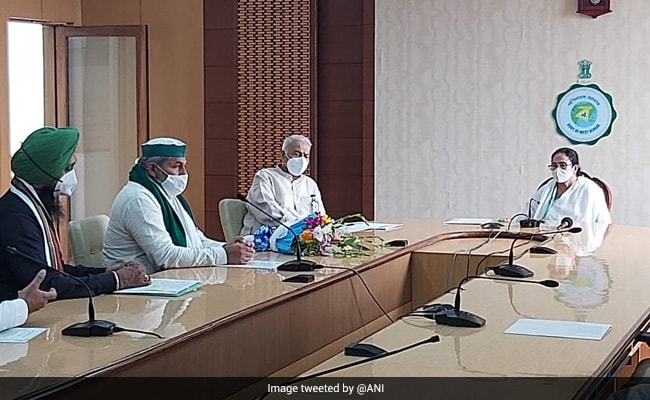 Speaking to ANI, Mr Tikait said he met the West Bengal CM in Kolkata on Wednesday and told her that the Opposition in the country is weak. “We (farmers) are sitting on streets, had the Opposition been strong we need not have done that. The Opposition should be strong,” the BKU leader told Ms Banerjee.

Asked whether he took permission from the Centre to meet Ms Banerjee, Mr Tikait replied, “I met CM and not a party chief. Did I meet the Afghanistan president, for which I had to take the permission of the central government? Does it require a visa to meet a CM?”

“We will meet all CMs over state policies. Uttarakhand has BJP government and Punjab has Congress government…we will meet them too. We have met Arvind Kejriwal,” he informed.

During a meeting with BKU leader Mr Tikait, Ms Banerjee on Wednesday reiterated that she has demanded a withdrawal of the three farm laws.

“Industries are suffering and GST is being levied on medicines. For the last seven months, they (the central government) didn’t bother to speak to farmers. I demand that all three farm laws be withdrawn,” Ms Banerjee said.

Mr Tikait, meanwhile, thanked her for her support and said West Bengal should function as a model state for others.

“The Chief Minister assured us that she would continue to support the farmers’ movement. We thank her for this assurance. West Bengal should work as a model state and farmers should be given more benefits,” he said.

Farmers have been protesting against the Centre’s farm laws for the last six months. Many have camped at the borders of the national capital.

Despite several rounds of talks between the Centre and the farmer leaders last year, the deadlock remains.

Farmers have been protesting on the different borders of the national capital since November 26, 2020 against the three newly enacted farm laws: Farmers’ Produce Trade and Commerce (Promotion and Facilitation) Act, 2020; the Farmers Empowerment and Protection) Agreement on Price Assurance and farm Services Act 2020 and the Essential Commodities (Amendment) Act, 2020.