Param Sharma – a 25-year-old who has gained notoriety for social media posts that showcase his lavish lifestyle – was arrested over the weekend. 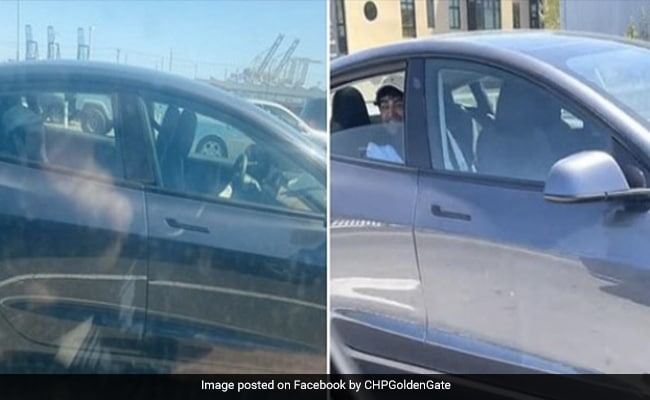 California Highway Patrol shared a photo of the Tesla operating with no one behind the wheel.


A San Francisco man infamous for posting videos of himself riding in the backseat of his Tesla operating on autopilot recently landed in jail for the stunt. But Param Sharma, remained unfazed after his short stint in jail – KTVU reports that he pulled the same stunt after his release and drove up for an interview with the news outlet sitting in the backseat for a brand-new Tesla on Wednesday, with no one behind the wheel.

Param Sharma – a 25-year-old Indian-American who has gained notoriety for social media posts that showcase his lavish lifestyle – was arrested over the weekend for sitting in the backseat of a Tesla Model 3 operating on autopilot.

The California Highway Patrol said in a Facebook post that he was spotted “riding in the backseat of a Tesla traveling on Bay Area roadways, with no other person being seated in the driver seat.”

The Highway Patrol said Mr Sharma was arrested without incident and booked into Santa Rita Jail on two counts of reckless driving and disobeying a peace officer, reports CBS News.

However, his stint in jail did nothing to curb his enthusiasm for reckless stunts. On Wednesday, Mr Sharma was again spotted riding the backseat of a Tesla. When asked by a KTVU journalist if he had purchased a new vehicle after his first one was impounded, he said, “Yeah, I’m rich as (expletive). I’m very rich.”

On his Instagram, the 25-year-old often shares videos that show him sitting in the back of cars on autopilot.

While Tesla cars come with an autopilot feature, the company and road safety authorities have cautioned against its misuse again and again. “Autopilot is a hands-on driver assistance system that is intended to be used only with a fully attentive driver. It does not turn a Tesla into a self-driving car,” states the electric car manufacturer’s website.

Before enabling autopilot, drivers must agree to keep their “hands on the steering wheel at all times” and to always “maintain control and responsibility for the car.”

California law also stipulates that autopilot cars have someone behind the steering wheel at all times.

Farmer Leader Rakesh Tikait, Others Step Up Protest Against Arrests