Only five lakh people, that is 6.5 per cent of Chennai’s population, have been vaccinated so far. This drive of vaccination at the doorstep is called “Sending hospitals to homes”. 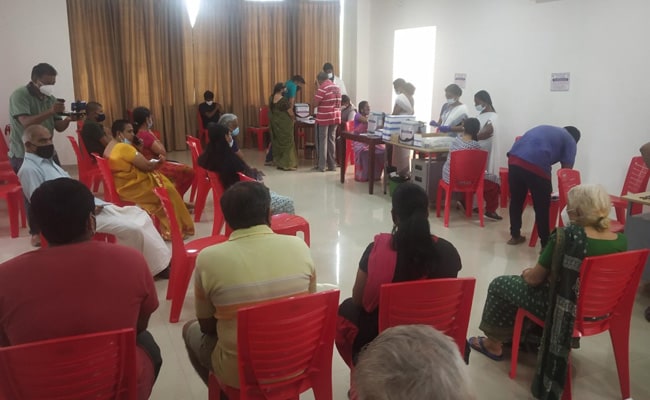 400 people from the 2,000-plus strong community got vaccinated in a few hours

Two health workers came knocking at the apartments of nine elderly residents at the sprawling Purvankara Windemere in Chennai to vaccinate them against coronavirus.

95-year-old ex-serviceman Krishna G Rao and his wife Ganga were relieved that health workers came home to vaccinate them. This is a part of the Chennai civic body’s drive to vaccinate a larger population.

“This is the best system for people like me instead of standing in a queue and wasting time. I am an outgoing man and for the last one year we were confined to this room,” Krishna G Rao told NDTV.

A few other nurses inoculated scores of residents at their club house who had any of the approved ID cards. A doctor was present monitoring everyone.

400 people from the 2,000-plus strong community got vaccinated in a few hours. The workers in the community including drivers, domestic helps, security and office staff too were vaccinated. The drive would continue at this community today as well.

“This is good. We don’t have to go outside, they come with a doctor and its good,” Roli Sharma, a teacher who got vaccinated, said. “We are excited. This will definitely bring down numbers,” her husband Manish, a software professional, added. 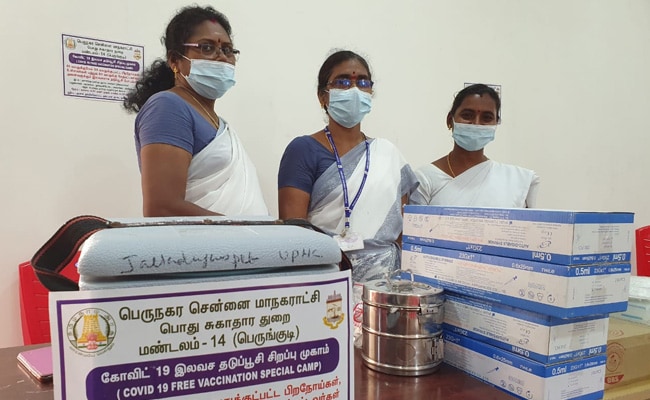 During the peak, Chennai accounted for a bulk of Tamil Nadu’s Covid tally. Now with schools and colleges shut amid fear of a second wave, the Chennai Corporation is on an overdrive to protect its residents, a bulk of who have also let their guard down.

“We target vulnerable groups and the elderly, the co-morbid who are 45 and above,” Dr Logesh Yuvaraj, a medical practitioner with the Chennai Corporation said.

However, health workers tell NDTV that even those under 45 are being vaccinated through this reach out.

Only five lakh people, that is 6.5 per cent of Chennai’s population, have been vaccinated so far. This drive of vaccination at the doorstep is called “Sending hospitals to homes”.

Chennai Corporation Commissioner G Prakash shared the lofty target the civic body has set for itself.

“With 5 lakh, Chennai remains the highest in vaccination among cities. We want to double this to a million by this month-end and cover a quarter of the population by April by vaccinating up to 60,000 people every day,” he told NDTV.

For the fifth day, Tamil Nadu’s daily Covid count crossed 1000. On Tuesday, Chennai accounted for 532 cases out of the state’s tally of 1,437.

At the same time, the Centre has reportedly refused permission to Karnataka to allow health workers to visit old age homes and apartment complexes to vaccinate people at their place of residence.