“Love you so, so much mom… I miss home so much,” wrote Sonam Kapoor 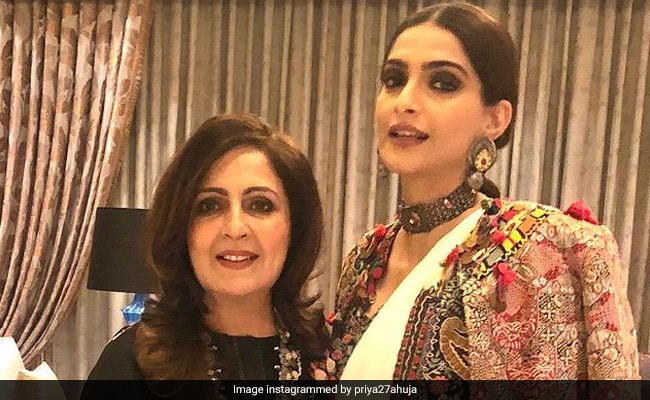 Sonam Kapoor, who celebrates her 36th birthday today, received a whole lot of love from her mother-in-law Priya Ahuja. Sonam’s mother-in-law shared a chunk of pictures on her Instagram account along with a super cute note. “Happy Birthday to our most adorable, beautiful, ever-smiling Sonam beta. Just as you brighten our days with love and laughter, may each and every moment of your special day be filled with the same joy and happiness,” Priya Ahuja wrote for the birthday girl, who is has been staying in London for about a year. She added, “May you have all the love your heart can hold, all the happiness a day can bring, all the blessings a life can unfold. Wishing you a joyful birthday beta with lots and lots of love and blessings. Love you and miss you and Anand Ahuja a lot.”

In the comments section, Sonam wrote: “Love you so, so much mom… I miss home so much. Can’t wait to see you soon.” Anand Ahuja added, “Love it! Miss you mom.” See Priya Ahuja’s post here;

Also, Priya Ahuja sent fresh flowers and balloons for the birthday girl. Sonam posted a picture of the roses sent by her moth-in-law on her Instagram story and she wrote: “Thanks Priya Ahuja for the flowers and multiple balloons. Love you so, so much.”

Sonam Kapoor married her longtime boyfriend Anand Ahuja in May 2018. Anand Ahuja runs the fashion label Bhane and the sneaker boutique VegNonVeg. The couple are currently staying in London.

Sonam Kapoor  was last seen in the 2019 film The Zoya Factor, co-starring Dulquer Salmaan and Angad Bedi. Sonam also stared in Ek Ladki Ko Dekha Toh Aisa Laga, alongside Anil Kapoor, Rajkummar Rao and Juhi Chawla. The actress will next be seen in the Shome Makhija’s film Blind. She also had a cameo in AK vs AK, starring Anil Kapoor and Anurag Kashyap.