The economy is on track to grow 10 per cent in the year that began April 1, according to the median of 12 estimates compiled by Bloomberg News


The Indian economy’s resilience will be tested by its ability to overcome a devastating outbreak of Covid-19, although no one’s yet doubting its potential to pull off the world’s fastest pace of growth among major economies this year. The economy is on track to grow 10 per cent in the year that began April 1, according to the median of 12 estimates compiled by Bloomberg News. That’s after several economists downgraded their forecasts in recent weeks to factor in local curbs on activity, including in India’s political and commercial hubs. 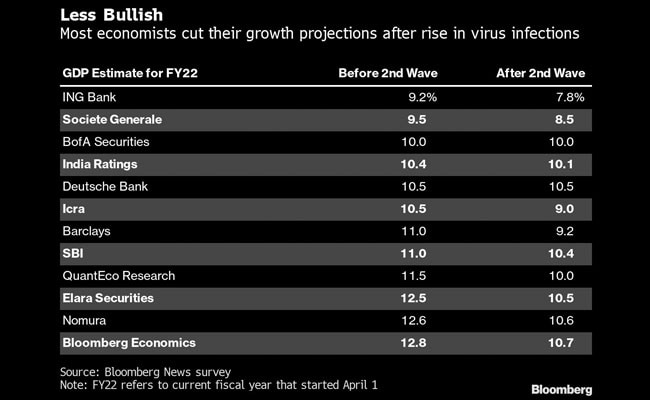 But the downgrades are a message to not take the economy’s recovery for granted. Economists say the relaxation of restrictions across states will determine the strength of the rebound, while the willingness of consumers to spend — as they did last year when lockdown curbs were lifted — will also be key.

It was pent-up demand for everything from mobile phones to cars that spurred consumption in Asia’s third-largest economy when it reopened last year after one of the strictest lockdowns that lasted more than two months. Data due later Monday will probably show gross domestic product grew 1 per cent in the three months ended March, making it the second straight quarter of expansion since India exited a rare recession.

Even as virus cases have started receding and some parts of the country may reopen by June, consumers are unlikely to spend freely, given the economic uncertainties and with unemployment at its highest level in a year.

Households would rather save than spend, said QuantEco Research economist Yuvika Singhal, who downgraded her full-year growth forecast by 150 basis points to 10 per cent.

The biggest hit from the second wave of Covid infections has been to demand, with a loss of mobility, discretionary spending and employment, the Reserve Bank of India said earlier this month. The central bank, which will review interest rates later this week, has kept monetary policy loose and injected liquidity into the system to support growth.

If the country is hit by a third wave of infections, as some experts warn, the economic costs could rise further, dragging down growth to 7.7 per cent, Bajoria said.