Maldives Foreign Minister Abdulla Shahid also said that the Indian Ocean is a zone of peace and security. 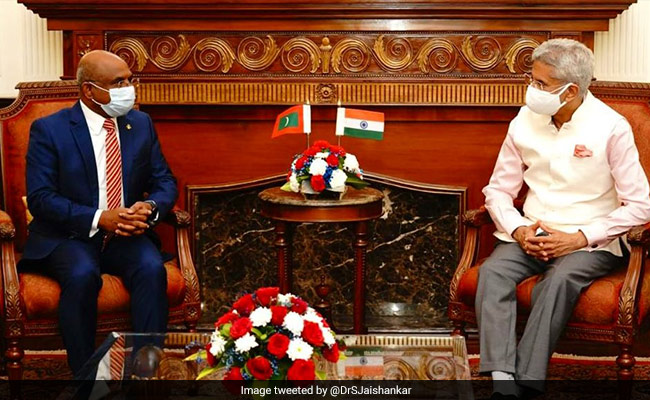 Maldives Foreign Minister is on a visit to India and met his Indian counterpart S Jaishankar today.

Maldives has termed India as the “first responder” and “best friend”.

In an interview to news agency ANI, Maldives Foreign Minister Abdulla Shahid also said that the Indian Ocean is a zone of peace and security.

Asked how he compares Maldives’ relations with India and China, the visiting minister said there is no comparison in international relations.

“In international relations, there is no comparison for countries like the Maldives. We only have friends, we don’t compare friends. But India has always been first responder and our best friend,” he said.

Mr Shahid is on a visit to India and met his Indian counterpart S Jaishankar earlier today. The two leaders reviewed the status of ongoing projects and bilateral relations.

The minister had earlier told ANI that the Maldives is working with friends for stability in the Indian Ocean region.

“We believe the Indian Ocean is a zone of peace and security that is essential to be stable for the prosperity of Maldives and we are working with all our friends that it remains the same,” he said.

Soldiers of two countries had clashed last year in eastern Ladakh following border tensions over actions of the Chinese Army.

“Well, I’m very pleased that in the India-China relationship there has been more dialogue. I’m confident that with dialogue India and China, both economic powers of the world, now will be able to avoid any confrontation. I trust the leadership of both countries to do the right thing,” he said.

Mr Shahid also spoke on how India and Maldives are cooperating in the United Nations.

“We work very closely with our neighbours in the south Asian region especially with India at United Nations and other international forums because the principals we adhere to are the same and that is why we are able to work so closely with each other,” he said.

Will China Economy Beat US To Become No 1? It’ll Never...