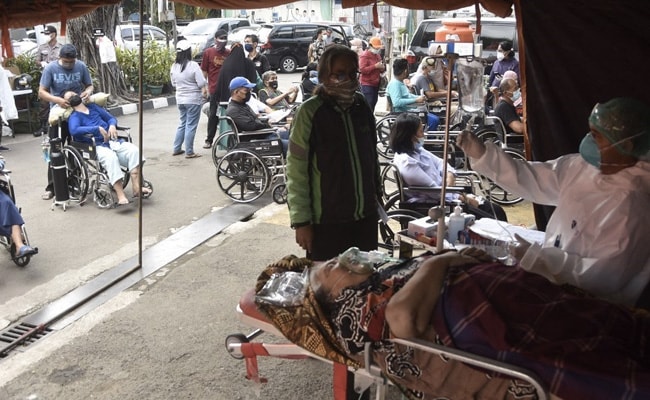 COVID-19: Hospitals in Indonesia’s capital Jakarta have been flooded with patients.

Indonesia set a new record for daily coronavirus cases on Sunday with more than 21,000, as hospitals are flooded with patients in Jakarta and other COVID-19 hotspots across Southeast Asia’s hardest-hit nation.

The figure brings the country’s tally for the pandemic to more than 2.1 million coronavirus cases with 57,138 deaths.

But the real number is believed to be much higher due to low testing rates for the deadly respiratory illness.

Indonesia’s COVID-19 case rates have soared in recent weeks after millions travelled at the end of the Muslim fasting month of Ramadan in May, and as authorities identified the presence of highly infectious newer virus strains.

“We predicted there would be a surge in the number of cases,” said COVID-19 taskforce spokeswoman Siti Nadia Tarmizi. “The peak is expected in the next two to three weeks,” she added.

Fears are growing that Indonesia’s creaky health system could collapse and there are reports of some overflowing hospitals being forced to turn patients away.

Hospitals in the hard-hit capital Jakarta as well as West and Central Java have been flooded with patients, including those infected with the highly transmissible Delta variant, first identified in India.

Indonesia’s government, widely accused of responding inadequately to the pandemic, has moved to temporarily beef up restrictions on movement, but it has so far held off imposing strict lockdowns seen in some other virus-wracked nations.

The country is aiming to inoculate more than 180 million of its 270 million people by early next year, but only about five per cent of the population has so far been fully vaccinated.

On Saturday, the government said it had reached its goal of inoculating more than one million people in a single day.