Once one of the teams reached the spot, some 400 Maoists encircled the security personnel from three sides. 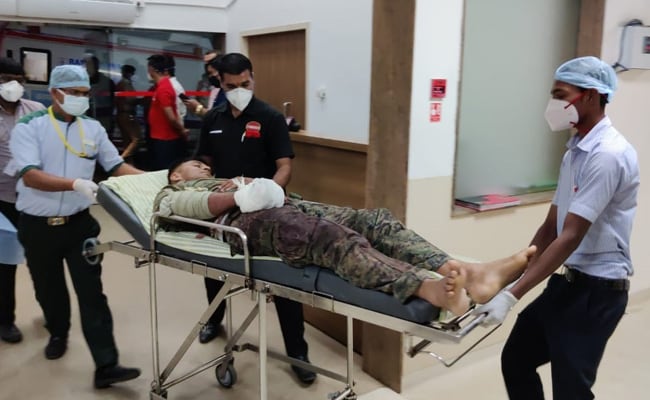 Over 30 personnel were injured in the line of duty on Saturday.

The security forces that were ambushed by Maoist guerrillas in Chhattisgarh on Saturday were acting on what is now being viewed as faulty intelligence. They had received inputs about the presence of two of their top leaders — Madvi Hidma, the People’s Liberation Guerrilla Army’s (PLGA) battalion number 1 commander, and Sujatha, an associate — in the Jagargunda-Jonaguda-Tarrem belt. It turned out to be a trap, sources now say.

Up to 2,000 personnel from six camps were mobilised to intercept the outlaw duo. This included those from the CRPF’s specialised jungle warfare unit CoBRA, a unit of its Bastariya Battalion, and the District Reserve Guard.

Hidma, in his early 30s, carries a cash reward of Rs 40 lakh and is a homegrown Maoist. He is suspected to be behind several such attacks, including the one on March 11 in Sukma in which 25 CRPF personnel were killed in action and the May 2013 one in Jeeram Valley in which about 32 people, including top Chhattisgarh Congress leaders, were killed.

Once one of the teams reached the spot where the Left-wing terrorist commanders were to be found according to the intel, some 400 Maoists encircled the security personnel from three sides. A heavy gunbattle ensued in the jungle, and while the forces fought back with all their might, they suffered huge losses due to the ultras’ tactical advantage, officials said.

Up to 22 personnel were killed in the line of duty and over 30 sustained injuries, they said. The Maoists looted some two dozen assault weapons from the forces. The security personnel took cover behind large trees and kept firing till they ran out of ammunition, officials said.

He had, however, earlier acknowledged that his personnel were “surprised and ambushed”. Speaking on Maoist casualties, he said, “It should not be less than 25-30.” Three tractors were used by the outlaws to carry the injured and dead from the site, he said.

The chief the anti-Naxal operations, Ashok Jueja, said the shootout lasted around four hours beginning around 11.30 am. “We’ve got to know that the Maoists used rocket launchers, hand grenades, and other sophisticated weapons,” he said.

Union Home Minister Amit Shah cut short his election campaign in Assam following the attack and vowed a “befitting reply” to the Maoists. He spoke to Chhattisgarh Chief Minister Bhupesh Baghel and told reporters that the sacrifice of the security personnel would not go waste.

Mr Shah will be visiting Jagdalpur to take part in the final rituals of the personnel killed in action, following which he will hold meetings with state leaders and officials, besides the injured in state capital Raipur.

Mr Baghel said anti-Maoist operations would continue in the state. “Our people have laid down their lives in the fight against the Maoists. Our jawans have fought valiantly,” he said.

Former Chief Minister Raman Singh, however, alleged insensitivity on the government’s part since state leaders are busy electioneering in Assam. “There is no one here to take responsibility and handle the situation,” Mr Singh said.

Every year, between February and June, the Maoists launch tactical counter offensive campaigns to recruit and train their cadre. Why the security forces’ intelligence failed this time is something to be investigated.