Union Minister Ravi Shankar Prasad on Friday attacked Delhi Chief Minister Arvind Kejriwal over his plans for doorstep delivery of food rations in the national capital, labelling it “jumla” (a false promise) and accusing the ruling Aam Aadmi Party of links to the “ration mafia”.

A furious Mr Prasad also demanded to know why Delhi had still not implemented the centre’s ‘one nation, one ration card’ scheme that, he said, ensures economically weaker sections get subsidised food grains and protects against corruption by linking distribution to the Aadhaar card’s biometrics.

“This ration delivery to homes sounds like a novel idea… but if you check the details you will find loopholes and possibilities for corruption. Is this what Arvind Kejriwal wants? Do you (Mr Kejriwal) want to break the law and fool the people?” Mr Prasad shouted at assembled reporters.

He also mocked Mr Kejriwal because “he is talking about home delivery when he failed to provide oxygen” – a cruel swipe at horrific scenes during the peak of the second Covid wave, when the centre and state struggled (and squabbled) to provide medical oxygen for patients on life support.

“Arvind Kejriwal is talking about home delivery of ration when he failed to provide oxygen to the people of Delhi. The Delhi government is under the control of the ration mafia,” Mr Prasad raged.

“We introduced ‘one nation, one ration card’ based on Aadhaar… people can get their ration at fair price shops anywhere in the country, and can even divide portions with family back home… sad to say only three states have not implemented – Delhi, Bengal and Assam,” he said. 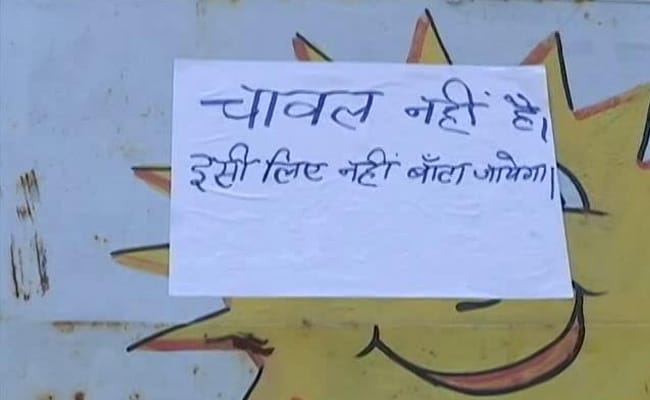 Mr Prasad explained the delay in BJP-ruled Assam and in Bengal – “where Mamata didi has problems with central policies”. “But what is the problem with Delhi and Kejriwal?” he asked.

“He talks dime to the dozen about ration cards and providing rations to the poor, but why have you not implemented the scheme? What is your problem?” the Union Minister shouted again.

“If there is a ‘lokpriya‘, or ‘people’s’, Chief Minister and a full majority… what is stopping them? Delhi government wants the centre to do the work… all they want to do is give speeches on TV,” he said.

Last week the centre blocked a doorstep food rations delivery scheme Delhi said would benefit 72 lakh people past the economic hardship – loss of jobs and wages – as a result of the lockdown.

Initially Mr Kejriwal tweeted: “Mr Prime Minister, what kind of an arrangement do you have with the ration mafia that you had to stop the Kejriwal government’s ‘Ghar Ghar Ration Scheme’?”

Days later an apparently now-subdued Chief Minister wrote to the Prime Minister to seek his help in overturning the centre’s decision to block the doorstep delivery of food rations.

The AAP government in Delhi had cleared the proposal to allow home delivery of rations in July last year; it was one of the promises made by the party in the run-up to the February assembly polls.