Thank you Neetu Kapoor for sharing this 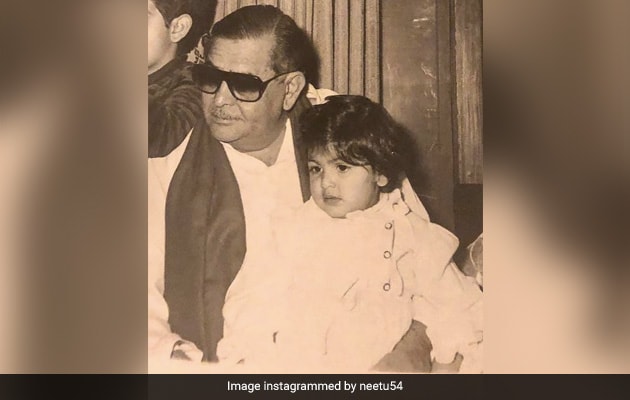 Neetu Kapoor, who frequently treats everyone to beautiful memories of her family on Instagram, shared a grandfather-special post on the platform on Sunday. Neetu Kapoor’s post features a priceless memory of the legendary actor Raj Kapoor (her father-in-law) and Riddhima (her daughter). In the picture, little Riddhima can be seen sitting on her grandfather’s (Raj Kapoor) lap. Both of them look adorable in the frame. We also see a throwback picture of Neetu Kapoor’s husband, late actor Rishi Kapoor and Riddhima’s daughter Samara in the collection. Rishi Kapoor can be seen happily posing with his granddaughter Samara in the throwback picture. The cute munchkin is sitting on Rishi Kapoor’s lap in the frame.

A month ago, Neetu Kapoor had remembered her late husband Rishi Kapoor on his first death anniversary. On April 30, Neetu Kapoor shared a throwback picture of herself and Rishi Kapoor on her Instagram handle. The actress also wrote an emotional note in her post back then. “All of last year has been of grief and sadness around the world for us maybe more as we lost him .. Not a day has gone by when we have not discussed or reminisced him as he was an extension of our existence…sometimes his wise advice: his wise cracks: his anecdotes! We have celebrated him all year with a smile on the lips as he will stay in our hearts forever. We have accepted life will never be the same without him !!! But life will go on…#rishikapoor,” her caption read.

Also take a look at some more pictures of the Kapoor family.

Rishi Kapoor married Neetu Singh in 1980. Ranbir Kapoor and Riddhima Kapoor are their children. While Ranbir is an actor, Riddhima is a jewellery designer. Ranbir is dating actress Alia Bhatt. Riddhima is married to Bharat Sahni, a businessman. Samara Sahni is Riddhima and Bharat’s daughter.

In terms of work, Neetu Kapoor is making her comeback in the upcoming film Jugg Jugg Jeeyo, in which she is paired opposite Anil Kapoor. The movie also features Varun Dhawan, Kiara Advani and Prajakta Kohli.